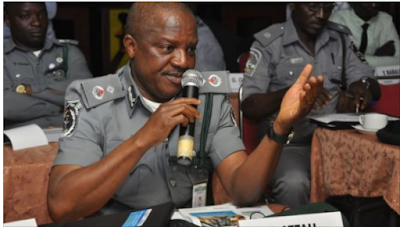 The Nigeria Customs Service (NCS) says contraband goods are still being found in the country because some smugglers import rice using gas cylinders.

Joseph Attah (pictured), public relations officer of the service, told NAN on Wednesday that most smugglers use unapproved routes to bring in their contraband goods into the country.

“People often ask where were customs operatives when contraband goods entered the country without being stopped,” he explained.

“We have seen a situation where rice is smuggled using gas cylinders or a situation where spare tyres are used, the tyre is perforated and rice is loaded inside and when you open the booth you see what is supposed to be a tyre.

“If you do not have tip-off, you are not likely to know that inside that spare tyre are 10 or 15 mudus (measures) of foreign rice.

“Another circumstance, smugglers use caskets that are used to carry corpses to either smuggle rice or petrol. They sometimes load petro in jerry cans and put it inside a casket, wrapped in such a way that you think is carrying a dead body.

“A situation like this, if you don’t have intelligence, you wouldn’t know. For instance, without tip-off, it is unlikely as a human being to accost a vehicle carrying a casket with a supposed dead body and request for such to be opened.

“If people with all these tricks succeed and escape, their smuggled items are what you find in shops, markets and houses.”

He added that smugglers’ actions were meant to sabotage the economy and the security of the country and assured that the service was determined and committed to checking that.

In November 2019, the federal government suspended fuel distribution to communities close to the country’s land borders to stem the smuggling of refined petrol to other countries.

The NNPC had said fuel stations in these communities are being used for smuggling as Nigeria’s subsidised petrol is cheaper than those of neighbouring West African countries.

At present, the country’s land borders are closed to check the smuggling of food items and arms.