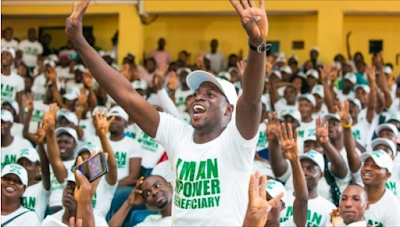 A group under the name, National Association of N-Power Volunteers, has accused Sadiya Umar Farouq, minister of humanitarian affairs, disaster management and social development, of holding on to their January pay.

There are at least 500,000 volunteers of  the N-Power scheme, a component of the National Social Investment Programmes (N-SIP), who get stipends every month, according to the federal government.

In a statement, the volunteers said Zainab Ahmed, minister of finance, had revealed that the money meant for their stipends had been released but they were yet to get it.

While claiming that none of the volunteers across the 36 states has been paid for January, they demanded immediate action regarding payment.

“It is no more a secret owing to the recent revelation from the interview granted the Minister of Finance on NTA Tuesday Live chat. She informed the entire world that, money meant for the payment of N-Power volunteers has been released to the Ministry of Humanitarian Affairs and Disaster Management under the leadership of the Hajia Farouq,” the statement read.

“The N-Power volunteers across the 36 States of the Federation are still being owed their January stipends as at 12th February 2020 even when other Federal Government workers have promptly received their salaries.

“It is also on record that other sections of the NSIP program like the National Home Grown School Feeding Program  are suffering the same fate as school children who are the direct beneficiaries of this program are starving due to lack of fund released to the food vendors.

“However, until this moment the Minister Of Humanitarian Affairs and Disaster Management is yet to refute the allegation by the Minister of Finance which has made volunteers to believe that Hajia Farouq is deliberately holding on to public money without reason.

“Going by the above, we are hereby calling on the Minister to as a matter of urgency to refute this statement made against her by the Finance Minister but if the statement is true, she should give us reasons why she has refused to pay volunteers who have exhausted their time, energy and resources offering in service to the Federal Government. She should also give volunteers reasons why she is still holding on to the stipends that many Nigerian youths solely depend on.”

Some of them also took to Twitter to express their grievances. Below are some tweets:

“Intentionally withholding the N-Power payments  is wickedness. After all the Oct to December wahala, and now this. Resign if you  are not competent enough to handle this program. Afolabi was far better than you,” Natty King, a Twitter user wrote.


intentionally withholding the Npower payments is wickedness. After all the Oct to December wahala, and now this. Resign if you are not competent enough to handle this program. Afolabi was far better than you.
— Natty King (@Chukeg) February 13, 2020

BigFredilly, another user wrote; “Can u please focus on paying NPOWER their stipends.. Don’t u have human sympathy at all… consider some of them that has family surviving under 30k that can finish in a day… visiting up and down.. do ur job as a mother we youths are ur children.”


Can u please focus on paying NPOWER their stipends.. Don’t u have human sympathy at all... consider some of them that has family surviving under 30k that can finish in a day... visiting up and down.. do ur job as a mother we youths are ur children
— Itz_BigFredDilly (@bigfreddilly) February 13, 2020

Below are some other tweets asking the minister to pay the volunteers.

kai!!! Beneficiaries are suffering under your leadership with just 30k stipend. Pls as a mother do the needful stop the recurring of this delay. @npower_ng
— ABDULJALAL MUHAMMMAD BELLO (@AbdulmBello4) February 15, 2020

Do u know that if u did not pay us today ,we will be entitled to two months stipends as from Monday bcus federal govt do prepare dia pv every 15 of the month,
By holding our payment u are fueling insecurity
Pay us our two months stipend including Feb
— Fellybam84 (@fellybam84) February 14, 2020

This is inhumane and barbaric if by this moment president @MBuhari initiated @npower_ng beneficiaries haven't been paid by d honorable minister @Sadiya_farouq of @FMHDSD
Ever since January stipend has been paid from the @FinMinNigeria
What is really going on @fola37 @NTANewsNow
— Ayodele Johnson 🌼 (@johnsonpark85) February 15, 2020

you are addressing issues but failing to handle matters in your jurisdiction, you can't pay Npower and the money is in your Care, you have failed you can't eat the money of the youths.
— Taurusapril (@SAugustval) February 14, 2020