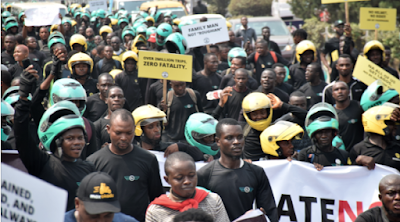 In 2017, Rotimi Amaechi, minister of transportation, advised governors against banning commercial motorcycles and tricycle because many Nigerians depend on them for survival. The minister, who spoke in Abuja during the national day of Amalgamated Commercial Tricycle and Motorcycle Owners, Repairers and Riders Association of Nigeria (ACOMORAN), had said banning them would affect the nation’s economy negatively.

“I don’t think we should ban okada because if we do, it will affect the economy; they only need to be trained to obey rules and regulations. The issue of security, safety and regulation should be dealt with at the state level; state governments should train okada riders,” Ameachi had said.

Three years after this comment, the administration of Babajide Sanwo-Olu, governor of Lagos state, directed security operatives to embark on total enforcement of the Lagos State Transport Sector Reform Law, 2018, banning commercial motorcycles and tricycles in some parts of the state. In all, the current administration restricted them from 10 major highways and 40 bridges and flyovers across the state.

In 2012, Babatunde Fashola, a former governor of Lagos, banned commercial motorcyclists from major roads and highways in the state but law enforcement agencies slowed down on implementation before the end of his tenure in 2015. Akinwunmi Ambode, Fashola’s successor, also laid emphasis on the ban in 2017 and just like under Fashola, the law was relaxed until Gbenga Omotosho, incumbent commissioner of information, announced that current administration has restricted okada and “keke” in 15 local councils from February 1, citing “security and safety of lives of Lagosians” as the reason. ORide, Max and Gokada, motorbike hailing services, and all forms of commercial motorcycle would also be affected by the ban.

Apapa, Yaba, Surulere, Ikeja, Lagos Island, Ikoyi Obalende, Lagos Mainland, Itire-Ikate and Coker-Aguda are notable among the local government areas and local council development areas where the transportation machines have been banned. Also, 10 expressways and 42 bridges were identified as “no go areas” for okadas and tricycles.

The declaration of the ban had stirred reactions from the public, particularly considering the number of Lagosians who are stakeholders in the transportation sector. The inadequate white-collar jobs in Lagos, Nigeria’s economic capital, has forced several graduates to take up jobs of commercial okada riders and tricycle operators.

As at 2017, there were 12 million okada and tricycle riders across the country, according to ACOMORAN. But the informal nature of the motorcycle business in Lagos makes it difficult for reliable data on the current figure of motorcycles and tricycle operators in the state.

However, according to a 2016 research carried out by Odugbesan Adetola of the department of geography and regional planning, faculty of social and management sciences Olabisi Onabanjo University, Ago-Iwoye, as of 2007, Lagos had over 200,000 commercial motorcycles. Going by the population growth rate of 8% in 12 years (2007 to 2019), at least 192,000 motorcycles were added. Hence, the state currently has an estimated 392,000 okada riders in the informal sector. This figure excludes motorbike hailing services such as ORide, Max and Gokada. While Max has an estimated 2,000 motorcycle riders, Gokada boasts of 10,000 motorcycle riders in the state.

An official of the Motor Vehicle Administration Agency told TheCable that about 200,000 number plates were issued out to tricycle operators and over 200,000 was issued to okada riders in 2019.

In essence, hundreds of thousands okada riders and tricycle operators would be affected by the government’s decision.


JOBS TO BE LOST, BUSINESSES TO SHUT DOWN


The Lagos government decision to ban the vehicles will not go down on okada riders and tricycle operators alone, several businesses will be negatively affected. Notable among such businesses are tricycle and okada retailers, petrol stations, mechanics, spare part dealer.

Felix, an okada retailer and spare part dealer in the state, said his business will be affected by the decision, adding that paying the salaries of 20 staff members will become difficult.

“I have up to 20 staff and some of them are married people, some are still single but they all have responsibilities. The government’s decision is going to have a very serious effect on our business,” he said

Amaifo Ugochukwu, a tricycle retail dealer in the Agege area of Lagos, lamented the decision, describing it as “an anti-masses policy”. He said so many families rely on the business chain for survival and a ban in several parts of the state will have a devastating effect on many families.

A tricycle operator in Ikeja said: “We have wives and kids and we are in search of what to eat, so the decision will really affect us. What I think they can do is to ban tricycle on major highways, but places like Guinness to Ikeja should not be restricted.”

A female tricycle operator in Ikeja also told TheCable that the decision is “an act of wickedness”.

“I pay my children school fees of N42,000.  This is minus the transport fare and other money I give them. It is sheer wickedness. Anyone who stands in front of me will either go or I go,” she said.

The government’s declaration has triggered conversations on issues of insecurity which might increase in the state. With the loss of jobs, youths may resort to violence, crimes and other social vices in a bid to survive and meet their daily needs.

A spare part dealer, who identified himself as Ibrahim, said there will be heightened insecurity as a result of a loss of jobs. He said customers no longer patronise him as usual since the announcement was made.

“The decision will affect the security of this state. For me selling spare parts, I no longer see customers, I don’t see my customers anymore and they are the ones improving our market here. Citizens generally would be affected because going from one place to another is easier with okada and tricycle,” he said.

Yusuf Kehinde, a tricycle operator, said he collected a tricycle worth N700,000 to pay back N1.1million. Kehinde, who is in his late 20s, said he is still comfortable with the work despite the difficulties attached. However, he said banning tricycles and motorcycles will make people resort to stealing, ritual and other forms of crime.

“I was riding okada before, then they came with threats to ban okada then I shifted to tricycle. Now if they ban tricycle, do they want people to start stealing? For example, tricycle riding is reducing the rate of unemployment. Most boys are riding tricycles to even help the economy. We collect a tricycle of N700,000 and pay back N1.1million. So it is not easy, but we don’t want to steal or do ritual. We prefer to work hard, so let them pity us,” he said.

Williams, a commuter, emphasised that a lack of alternative jobs will lead to an increase in crime.

“The government should have plans for those that will be disengaged from their various jobs because they can resort to crime and other activities that would have a negative impact on the society,” he said.

In an interview, a chairman of NNAMORAL zone in Surulere, one of the local government areas where the ban will be implemented, told TheCable that the government’s decision will generate more problems, especially for the masses. He said the lack of alternative provision for okada riders and tricycle operators will bring more damage to the state.

He said the unions are still pleading with the government to have mercy on the generality of the public as there are several people whose means of livelihood is connected to both okada and tricycle operations in the areas where the ban will be implemented.

Asked if they were consulted before the announcement was made, the chairman said they were called for a 30-minute meeting but they were not given room to speak.

“They called us on Thursday before the decision was announced a few days after. We went there, sat down and under 30 minutes they ended the meeting. They didn’t allow members of the union to speak or give their view,” he said.

“Right now, we are pleading with the government on behalf of the entire Lagosians. If they look at the sector, some many people’s survival depends on it. If they solve the issue of traffic congestion, people won’t be able to patronise okada very well and if that happens, the okada business will fall. But now that the business is moving, people have invested so much in it. We are pleading that the government should have mercy on everyone whose means of survival is tied to the industry.”

In an interview with Channels Television, the state commissioner for information defended the action of the government, saying no individual or group, including motorbike hailing services, was licenced to ride okada in Lagos. He said the rate of robbery and death recorded in the state have become worrisome, adding that the ban is a decision in the right direction.

“In fact, what the government was trying to look at is how to regulate these people so that their excesses can be curtailed,” he said.