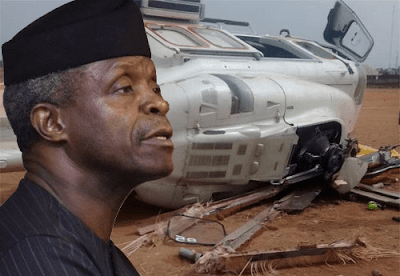 Vice President Yemi Osinbajo, Sunday marked one year of his survival from helicopter crash in 2019 with a thanksgiving service at the Aso Villa Chapel, Abuja.

The Vice President and 11 other persons exactly at the height of political campaigns for the general elections exactly a year ago, escaped unscathed a helicopter crash in Kabba, Kogi State.

Prof. Osinbajo at the Thanksgiving service, was joined by his wife, Dolapo, family members and his aides, including some of those who were with him when the incident occurred.

Looking back at the incident which could have thrown the country into mourning if not for God’s benevolence, Osinbajo, who spoke to State House correspondents, described it as “an awesome and incredible deliverance.”


According to him, “I think that what happened on that occasion was so amazing, so miraculous; 12 of us in a helicopter; the helicopter crashed and not one scratch on anyone of us.

“That’s just incredible.  So, we can only continue to thank God and to praise the Lord Jesus Christ for an awesome deliverance of so many of us.

So, we just keep thanking God. “That’s why we are here this morning to just praise God.” He said that the survival of all the people in the helicopter crash demonstrated God’s mercy and has strengthened his faith in God and in the Nigerian nation. He said, “Can you imagine a situation where you survived a helicopter crash?

I think it demonstrates that God is merciful; God is awesome; he is able to do all things. “I think it just strengthened my faith and the faith of all those who were there.” Also speaking to journalists, Chaplain of the Aso Villa Chapel, Reverend Seyi Malomo, said the incident was “a miracle for Nigeria; it is not just for His Excellency alone, it’s for the President.

It is for every one of us.” Malomo said that thanksgiving is an injunction in all faiths and is necessary when God does something that defies human understanding. Said he, “When God has done something great for you, it is just necessary to say thank you to God. “We all know that that is part of our culture.

All faith, all religion; thank you is part of our language, but when what he did is even beyond imagination—12 people in an aircraft, no scratch—it could only be God.”