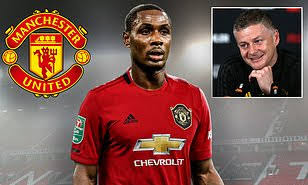 The outbreak of the deadly coronavirus has seen former Super Eagles striker, Odion Ighalo, yet to be pictured with his new colleagues, as he remained isolated from his new teammates.

Ighalo has been prevented from training with the rest of the players after the club opted to take precautions against the coronavirus.

United completed the loan signing of Ighalo from Chinese side, Shanghai Shenhua, in the closing minutes of deadline day.

According to The Mirror, the 30-year-old was unable to make an appearance at Carrington in order to minimise any risk of the illness being passed on in the coming days.


Despite the chances of Ighalo carrying the coronavirus being regarded as extremely small, United made the decision to effectively apply a 14-day incubation period.

However, according to Sky Sports News, the recent chain of events has always been part of United’s plan ahead of handing the Nigeria international his debut against Chelsea next week.

Like in the initial report, it is stated that the decision taken by the Devils is in line with the two-week incubation periods which are being carried out with the majority of people travelling from China to another country.

While Ighalo also missed out on the club’s training camp in Marbella, Ole Gunnar Solskjær has said that the Nigerian could make his debut for the club on Monday at Stamford Bridge.