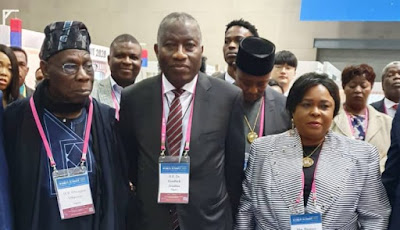 Former Presidents, Olusegun Obasanjo and Goodluck Jonathan met in South Korea along with Patience Jonathan at the ongoing World Summit 2020 in Seoul.

The two former presidents were attending tge World Summit 2020, organised by Universal Peace Federation for world leaders to deliberate on the imperatives of peace, security and human development.

“I was delighted to meet His Excellency Chief Olusegun Obasanjo at the ongoing World Summit 2020 in Seoul, South Korea where we joined leaders from across the world to make a case for lasting peace, interdependence & shared values among the world’s peoples and nations,” Jonathan tweeted on Tuesday.

Jonathan had, while speaking at the World Summit, tasked world leaders not to discountenance the values of soft power in the search for lasting peace, stressing that military capabilities alone has not served the intended purpose of keeping the world safe.


The former President also charged nations to prioritise education and the strengthening of family values as means of reinforcing strong bonds of kinship that would discourage youths from taking to violent crimes.

“I believe that the weapon for guaranteeing the peace the world needs today is not in our intimidating armoury and sophisticated nuclear sites but in our hearts. The world looks up to us as leaders to reach out to the innermost recesses of our hearts, levering our common humanity, and embrace one another in true love and sincerity to save our peoples.

“It is obvious that military capability alone has not served the intended purpose of securing our world. In Middle East and Africa, more than other parts of the world, insecurity, insurgency and terrorism have continued to get worse, despite all efforts to combat them and enforce peace by affected nations and their allies. This is partly because we have paid more attention to our military might more than we have given to the imperative of promoting understanding, building honour and love in our families and societies,” he said.

Speaking further on family values, Jonathan who is the Chairman of the African chapter of the International Summit Council for Peace (ISCP), said: “A peaceful family unit entrenched in strong bonds of kinship, ethics and a well-established tradition of honour will fight insecurity and terrorism better than any weapons. This is because if we pay more attention to the imperative of producing well-adjusted, rationale human beings, it will dry up the human supply lines that feed the cells of terrorists.

“They will no longer be able to recruit misguided and uneducated youths who are willing to either kill or be killed in the most dastardly and bizarre method, in pursuit of dark and hideous ideologies. With well-educated and properly aligned youth who are future leaders, the world will then have less leaders who prioritise war over peace.

“Without global peace, the world will continue to spend more resources, which should have been channeled into development purposes, either generating or managing crisis”.

The three-day conference has in attendance over 5,000 delegates and more than 210 leaders and top government officials from across the world.

I was delighted to meet His Excellency Chief Olusegun Obasanjo at the ongoing World Summit 2020 in Seoul, South Korea where we joined leaders from across the world to make a case for lasting peace, interdependence & shared values among the world's peoples and nations.
GEJ pic.twitter.com/VquSHUttbP