Nigerians warned to prepare for flooding 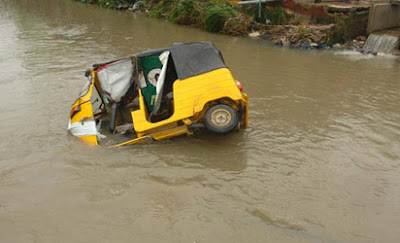 The Nigeria Hydrological Services Agency has warned state and local governments in the country against the consequences of lack of preparation for possible incidents of flooding during this year’s rainy season.

Floods wrecked havoc in many parts of the country in 2019, leading to loss of lives and destruction of property.

The Director General of NIHSA, Clement Eze, told journalists in Abuja on Tuesday that the floods would have been less destructive if preemptive steps were taken to mitigate their impact.

Eze advised the states, LGs and other stakeholders that the period before the rain was the right time to put necessary measures in place to avert flood-related disasters during the rainy season.

“Usually, the months of July, August and September are the peak of flooding season in Nigeria.

“The Nigeria Hydrological Services Agency wishes to advise state and local governments, stakeholders, multi-national companies and public-spirited individuals and philanthropists that this period of dry season is the best time to prepare for floods in year 2020.

“There is reasonable time to do these now before the rain set in,” Eze added.

The 2020 Seasonal Rainfall Prediction, which was recently unveiled by the Nigerian Meteorological Agency, projected that rainfall would start on February 24 and cease by December 28 in the southern part of the country.

NIMET also predicted that the rain would start on June 22 and stop on September 26, 2020 in the North.

Eze explained that NIMET’s projections implied that Nigeria would likely experience a longer period of rainy season in 2020 when compared to 2019.

“The states and the LGs should stop resorting to fire brigade approach by the time the rain starts.

“If adequate precautions are taken, there will be no flooding, but without adequate preparations even the smallest amount of rainfall can lead to flooding,” he added.

Eze further disclosed that Nigeria did not have enough dams, compared to other countries of similar size.

Currently, there are about 200 dams in Nigeria, out of which only 56 are large dams.

“The more dams we have in Nigeria, the more we will be able to control flooding,” Eze explained.