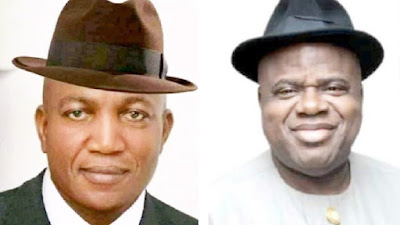 A cross section of Nigerians have taken to social media to air their views on the Supreme Court judgement which saw the All Progressives Congress, APC, candidate, David Lyon sacked as Bayelsa Governor-elect.

A panel of justices led by Justice Mary Odili in a unanimous judgement on Thursday held that Degi-Eremieoyo presented a forged certificate to the Independent National Electoral Commission (INEC).

In the lead judgement read by Justice Ejembi Eko, the court upheld the November 12, 2019, judgement of a Federal High Court in Abuja, which disqualified Degi-Eremieoyo from participating in the governorship poll.

The apex court ruled that since Degi-Eremieoyo shared a joint ticket with the governor-elect, his disqualification invalidated their nomination by the APC.

The apex court then ordered INEC to issue fresh certificates of the People’s Democratic Party (PDP) being the party with the next highest votes.

@Israeloflife “The Supreme Court has removed an APC Governor and replaced same with a PDP man.There’d be no attacks on the judiciary now. There’d be no 1 Million man march against the decision.Democracy isn’t in danger now. Surugede is the dance of the spirits.”

@Uncle_Ajala “See how the APC Deputy Governor to Lyon, stopped him from becoming the Governor of Bayelsa state, by presenting fake credentials according to Supreme court. May we not work with someone that will ruin our hard work and achievement.”

@Mayrocnigltd “Nigerians seem to have forgotten that Jonathan visited Buhari recently, what do you think the meeting was for? You think it is to seek advice from Goodluck about boko haram, they have sealed deal of scratch my back, I scratch yours.”

@Dinerojay22 “Let them scrap INEC since Supreme court is now deciding who wins elections. INEC is losing its credibility everyday in the hands of our Judiciary.”

@Olufemiloye “I was about to say democracy will now be in danger or not, depending on which side the politicians and their supporters are.Bayelsa judgment is as interesting as Imo judgement to me. And those who condemned the Supreme Court for the Imo will now commend it, and vice versa.”

@Adebanquie “Tanko-led Supreme Court will suddenly be praised with all superlatives by PDP and its sympathizers.”

@Waliyadeniran “Where the Legislature and the Executive have failed in their responsibilities at ensuring free and fair elections, the Supreme Court, being a policy Court, at every given opportunity must stop at nothing in ensuring there is sanity in our electoral process.”

@MMOloyede “What an unexpected Judgment from the supreme court. PDP, Is Democracy still on trial?

@FreeNigerians “The Supreme Court finally have enough courage to do what is right.”