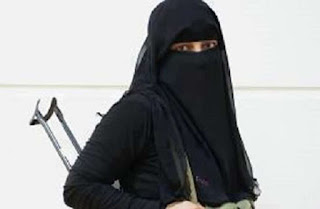 Troops of the Nigerian Army have arrested a suspected bandit, Zainab Abubakar, at the Ungwan Salaha, Mararaban Jos community, in the Igabi Local Government Area of Kaduna State.

The military said on Thursday that preliminary checks into the suspect’s phone “revealed a video clip of her dancing with an AK-47 rifle hung on her neck.”

It was learnt that Abubakar was arrested on Monday by troops of the 1 Division Garrison under the Operation Mesa.


The Nigerian Army Operations Media Coordinator, Col. Aminu Iliyasu, who confirmed the arrest of the suspect to newsmen, said, “Troops of the 1 Division Garrison have arrested a female bandit at Ungwan Salaha in Mararaban Jos. Preliminary checks into her phone revealed a video clip of the suspect dancing with an AK-47 rifle hung on her neck during a social event.

“The same troops on a reconnaissance patrol around Kirsa Village in Anka LGA of Zamfara accosted a motorcyclist conveying a young woman.

“However, the rider abandoned the motorcycle and the lady and ran into a nearby bush.

“After the encounter, troops arrested the lady, recovered one AK-47 rifle, one AK-47 rifle magazine loaded with 30 rounds of 7.62mm special ammunition and a Honda motorcycle.

“Similarly, on February 25, 2020, troops of 1 Division Garrison, acting on credible information, intercepted a group of bandits who had earlier kidnapped some victims from Niger State.

“Consequently, the troops made contact with the bandits at Chikwale in Kachia LGA of Kaduna State. The criminal bandits abandoned their victims and beat a hasty retreat into the nearby forest.