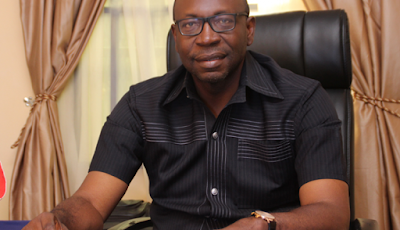 A Judge in the Federal High in Benin City, Justice M G Umar, has threatened to revoke the bail condition granted to Pastor Osagie Ize-Iyamu, State Chairman of the Peoples Democratic Party, Chief Dan Orbih and three others if they were to play any antics to delay commencement of trial.

Pastor Ize-Iyamu and others were arraigned on an eight-count charge of conspiracy with themselves to commit money laundering to the tune of N700 million, an offence contrary to section 18(a) of the Money Laundering (Prohibition) Act 2011 as amended which is punishable under section 15(3) of the same Act.

The EFCC alleged that the defendants received the sum of N700 Million prior to the 2015 general elections, from former Minister of Petroleum, Mrs Diezani Alison-Madueke.


Justice Umar had issued the threat after listening to arguments of defendants seeking a six months adjournment because of ill health of Mr. Efe Anthony.

Mr Anthony had asked for the long till June for him to be able to stand for trial.

He reminded the Court that they have always been present and drew attention to three consecutive times they were in court and the court did not sit.

Lead Counsel to first defendant ,Mr Kingsley Obamojie , that of the Second defendant ,Professor Osas Izebhiuwa and that of the third and fourth defendants ,Mr Paschal Ogbome pleaded with the court to grant the application as the Anthony needed to be a bit healthy to appear in court for his defense.

Ugbome urged the court to be fair to all parties and pointed out the whereas it was inevitable for humans to be indispensable , they had actually striven very hard to ensure that the hearing commenced in earnest .

But the Prosecution Counsel, Mr L P Aso, said the defendants were unreasonable in their application for sixmonths adjournment.

Aso argued that the language of the application attempted to frustrate the prosecution through unwarranted delay.

Justice Umar who threatened to revoke the bail condition adjourned sitting to March 2nd for hearing and maintained that he would not tolerate any form of delay in the prosecution.

The Economic and Financial Crimes Commission (EFCC) had said the accused were alleged to have made cash payment of N60,650,000 to one Henry Tenebe of Estako West Local Government Area and N61,647,000 to one Momoh Andrew Ojo of Akoko-Edo without going through a financial institution.