Massacre of 30 in Borno: Military failed us despite attack was forewarned by DSS – Gov Zulum 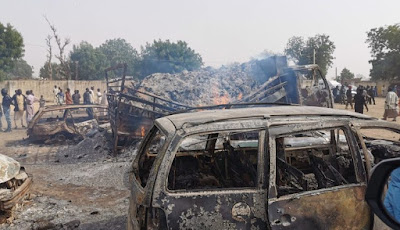 “I am being pushed to the wall to say the truth,” the governor said in anger.

“Since my inauguration as the governor of Borno State from May 29th to date, Auno town has been attacked for about six times now. And the reason is that the military has withdrawn from Auno town.


“We have made repeated plea to the military to re-establish a base in Auno since it is one of the flashpoints of the Boko Haram, but nothing has been done to that effect.”

Governor Zulum said this while visiting the scene where Boko Haram gunmen had attacked and massacred many travellers that were stranded outside the military entrance city gate outside Maiduguri, usually locked at 6p.m.

“There were no soldiers here; they have all withdrawn. We are not being confrontational or undermining the capacity of the Nigerian military, but the fact is that we have made several attempts for the Nigeria military to establish their unit in Auno but nothing was done.

Addressing the military commander, the governor said, “if you doubt what I am saying, can you count them by yourself?”

The governor said the Auno attack was forewarned.

“Information was circulated and we got a security report from DSS that Jakana can be attacked, and they came and attacked as predicted, ” he said.

“This is sad because the Borno State University is not more than 8km from here; which means this is an attack on Maiduguri town. So if you cannot protect Maiduguri, then what happens to the rest of us in the city?