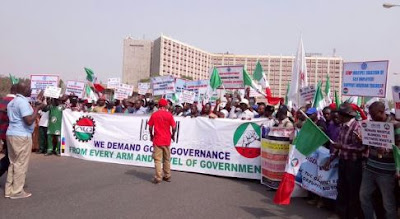 President of the Trade Union Congress, Qadri Olaleye, said the union would approach the Federal Government with a letter to demand total wage review, which it said, was long overdue.

During the minimum wage negotiation in 2019, the Minister of Labour and Employment, Dr Chris Ngige, had told labour leaders that the FG had set up a committee on total wage review.

The minister, who said the report of the committee would be submitted in December 2019, noted that the total wage review was not the same as minimum wage.

During an interview with our correspondent on Thursday, Olaleye confirmed that the idea of total wage review came up during the negotiation.

“The truth is that we used the wage review issue to put more pressure on government.

“We have yet to follow up on the matter since we successfully used it as an instrument to pressure government to accept our demands on the new minimum wage implementation.”

Asked if the agitation for wage review had finally died or suspended indefinitely as the minister had said, Olaleye said the matter would be resuscitated and that a letter would be sent to the minister by the leadership of the union.

He said, “We will send a letter to the FG through the minister to remind the authorities that wage review is due and needed to be looked into, just as the minister said during the minimum wage negotiation. We might send the letter next week.”