Kanu sitting with US leaders shows Biafra is near – IPOB 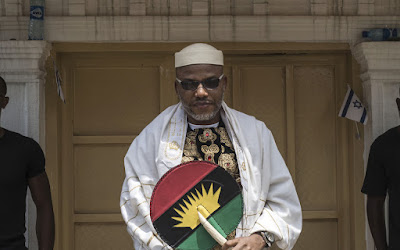 The Indigenous People of Biafra on Saturday hailed the leadership of the Republican Party in Iowa, United States, for inviting its leader, Nnamdi Kanu, to President Donald Trump’s campaign rally at Des Moines Iowa.

The group claimed that Kanu was a special guest at the rally held on Thursday, January 30, 2020 in the area.

It maintained development was an indication that the realisation of a sovereign state of Biafra was at hand.

In a statement by its Media and Publicity Secretary, Emma Powerful, the group described it as ironic for a leader that was labelled a terrorist by his home government to be treated as an important personality in an event attended by the US president.


The group reassured the people of Biafra of its commitment to actualising the republic of Biafra.

It said its collaboration to realise the objective with some powerful countries in the world was yielding results.

The statement read in part, “We, the global family of IPOB, wish to appreciate the leadership of the US Republican Party in Iowa for their invitation to our great leader Nnamdi Kanu as a special guest at Trump’s campaign rally at Des Moines Iowa last Thursday.”