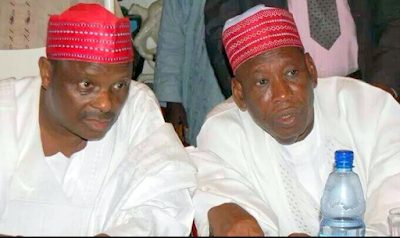 Kano State governor, Dr. Abdullahi Umar Ganduje, on Friday took a swipe at the immediate-past governor of the state and his estranged political ally, Senator Rabi’u Musa Kwankwaso saying the latest outing of the All Progressive Congress (APC) during the just concluded Kano re-run election has retired him (Kwankwaso) from politics.

Ganduje stated this at the Kano Government House on Friday while receiving the Speaker, Kano State House of Assembly, Hon. Abdul’aziz Garba Gafasa with other principal officers of the House, the state APC Chairman, Abdullahi Abbas and other party leaders and elders, who presented to him the four newly elected state legislators immediately after they collected their Certificates of Return from  the Independent National Electoral Commission (INEC).

He said the APC’s  victory at the election was a clear indication of how Senator Kwankwaso had been retired from politics.

Condemning Kwankwaso’s style of politics, Ganduje said: “Some political remarks and behaviours of  Kwankwaso, particularly during election period are  not in order.

“Our style of politics is calculative and decent. I can therefore not follow his style, that is always castigating without any decorum. We respect people and we see respect and dignity in people. Ours is not like theirs.”

He called on the elected members, to always respect party leadership and be loyal to the party, adding, “we believe that the supremacy of the party should always be observed with all intent and purposes. You should  make sure that, you become loyal party members.”

On why APC failed to secure the seat of the House of Representatives member representing Kiru/Bebeji Federal Constituency, he said, “we couldn’t get that seat as a result of the  crisis that rocked the party at the constituency. The APC candidate was in conflict with the leadership of the party in the state, in the local government, with the local government administration and even with the electorate. That caused us to lose the seat as a party.

“But even at that, the winner of the party, who came from the opposition PDP, was on the radio announcing his resolve to work hand in hand with the administration of President Buhari and the Kano State government. This is commendable.

“Indeed, that was made possible because of the hands of friendship I extended to all people urging them to come and join hands with us and move the state forward in particular and the nation in general. We are happy to see that so many people including the just elected member House of Representatives, from Kiru/Bebeji Federal Constituency, Ali Datti Yako, heeds to the call.”

Ganduje also used the occasion to congratulate the father of Kwankwaso, Alhaji Musa Saleh Kwankwaso for being elevated from Majidadin Karaye to the position of Makaman Karaye Emirate, a kingmaker in the emirate, saying, “he deserved the position very well. Our respectful father and an elder statesman. I am congratulating him on behalf of the government and people of Kano State.

“We pray that Allah gives him all assistance to allow him discharge all his assigned responsibilities very well. Our father is very hardworking and very close to his people. That, among others will help him perform wonderfully well.”

In his remarks, Speaker of the State House of Assembly, Gafasa assured the governor that the House has over two-third of the members as APC.  “We are comfortable as we have enough members to back and support any government policies for the overall development of the state, he said, revealing  that more members were coming to join the ruling APC in the House.  “They too believe in how this administration is fast developing the state. With this, I can say, our governor His Excellency, Dr Abdullahi Umar Ganduje, is doing very well for the overall development of the state.”

The APC state chairman, Abdullahi Abbas commended the electorate for finding the party candidates worthy of being re-elected.

“The APC will continue to be the best party in any future elections to come. We are determined, through our developmental projects and policies, to continue working towards sustainable development,” he assured.