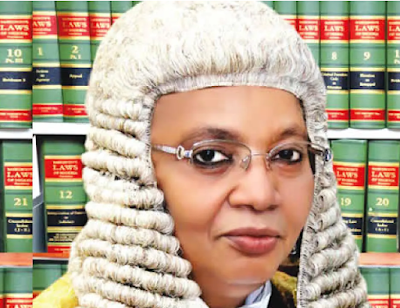 Retiring President of the Court of Appeal, Justice Zainab Bulkachuwa has declared that she will use the rest of her life for the service of her community and the rest of the world.

Bulkachuwa stated this during the commissioning of the reconstructed, upgraded and furnished seven official quarters for judges of the Court of Appeal, developed by the Rivers State Government, according to Simeon Nwakaudu, the Special Assistant to the Rivers State Governor, Nyesom Wike, on Electronic Media.

She said: “As I go into retirement, the lessons of years past are going with me. I will spend my next phase of life, giving more of myself to my society and to the world at large.

“I want to look back and smile in the knowledge that all I have done, all I have learned, all that I have experienced, will not be in vain. I will make sure that others benefit from that.’

Bulkachuwa said that she wants to be remembered as a woman who contributed to the development of the country.

She said: “I will go away with good cheers. I pray that life will continue to be good. In the midst of my bitter experiences, more than everything else I want to be remembered as that woman who judged right, who did the best she could in every situation and who loves her country.”

She praised her Late Father, Late Husband and her present husband for their very positive contributions to her successful career.

She added: “The death of my husband tore my world apart. This tragedy hit me really bad. I scaled through the moments of despair with the help of my extended family and friends. The deep scars of his death will follow me for the rest of my life.

“My life has been awesomely phenomenal. I was born at a time when it was difficult for girls to go to school and even when they did, they were not allowed to go beyond primary school level before being married off. I was lucky to have a father who had an interest that I be educated. I was married twice to supportive men who encouraged me to be the best and assisted me to my successes.”

Wike had while presenting the structure, said it is the contribution of the State Government to the Court of Appeal.

He said: “We have developed these Houses for the justices of the Court of Appeal. We also have for the Presiding Justice and other justices.

“The reconstruction, upgrade and furnishing of these House form the contribution of the Rivers State Government to the Court of Appeal.”

He informed that the State Judges Quarters were ready for inauguration.

“We also urge that you take a look at the Judges Quarters which we are building for our State High Judges. This shows that we also care for our judges”, he said.