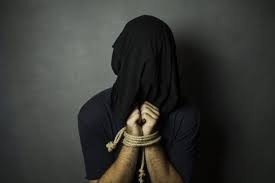 Jalingo Millionaire, Chief Uche Obi, has regained his freedom after five days in the hands of his captors.

Obi while narrating his ordeal to journalist in Jalingo, accused Danladi of sponsoring police from the police headquarters Abuja to carry out what he described as “criminal act”

“Since Wednesday last week.i discovered strange people that were trailing me, I went to the gym that very day in the evening, I saw one black Hilux Jeep parked beside my car, I was watching to see who will come out from the Jeep but the people did not come out, I decided to leave the car and take another dimension”

“The next day which was Thursday, after taking stock of my businesses, as I was heading home, I discovered a white Hilux with tinted glasses parked close to my gate, I diverted to another direction again”

“On Friday, when I was in my office with my customers, a friend of mine came and excused my customers that he wanted to talk to me in private, when I granted him audience, he told me that he heard some people in a restaurant where he was eating saying they are policemen from Abuja, that they came down to Jalingo to arrest me, the people said they have already obtained a court warrant”

“When I heard the story, there was nothing I could do than to run for my life, that was when I ran to the police headquarters here in Jalingo and reported to the commissioner of police, I also enquired from him if there was an official information for my arrest on his table but the commissioner told me point blank that he was not aware of any such development, he, therefore, referred me to his Deputy Commissioner, the DC himself denied any Knowledge of warrant of arrest on me”

“When I came back from the police on Friday, the next day being Saturday I decided to stay indoors so that whatever wants to happen to me will happen in my room, as I was reflecting over the incident, I discovered that since 1989, I came to Jalingo, I had no problem with anybody apart from Sani Abubaka Danladi, the former Acting Governor of Taraba state”

“Only recently I had problems with Sani Abubaka Danladi, we had an issue in the court, I then decided to call the younger brother to Sani and get information from him but the younger brother promptly told me that his elder brother can not petition me or send people after my life, I then called my brother by name Okechukwu, I told him that I have no problem with anybody here in the state apart from Sani Danladi but this is what has been happening within some few days ago”

“When Okechukwu called Danladi, he, first of all, denied that he is not behind any petition against me and he did not send anybody against me.
But that same day around 2:pm, some people started calling me that they are policemen, that they came from Abuja Force Headquarters, that they learnt I went to the commissioner of police claiming that their coming to Jalingo was illegal, that I should come to the Jalingo police headquarters and they will prove to me they are in Jalingo not on illegal duty, they insisted to know when am leaving my house”

“I suspected something wrong and i said they should go and invite me at the Force Headquarters not in Jalingo, that was when I forwarded their number to my brother Okechukwu, my brother then used the number and forwarded it to one of the DIGs in Abuja, the DIG called the number on several occasions but none of the acclaimed policemen picked”

“Okechukwu called me that the DIG is calling them but they are not picking, the said policemen called me once again, I then asked them to pick the call that has been coming to their phone, I revealed to them that the number calling their phone is form one of the DIGs in Abuja”

“That was how we ended our call with them that Saturday, late in the night, my wife gave me her phone that my brother Okechukwu was calling and that he wanted to talk to me, when I picked the phone call, OkeChukwu told me that is just now that he discovered that the person who wrote the petition against me was Sani Danladi”

“Okechukwu then told me that Sani Danladi just called him (Okechukwu) that me Uche Obi is proving stubborn and he (Sani Danladi) is going to show to me that if I know five DIGs himself knows more than fifty DIGs and the IG himself, that as he was speaking to Okechukwu, his men have already surrounded my house, that was when Okechukwu advised me to at least find my way out of my house for that night”

“Okechukwu said the way Sani called him and was vibrating, he knew I would not be safe if I fall into their hands,that there will be trouble”

The Jalingo businessman while narrating his experience wondered why the police were hunting him even in the night with a court order, He said he decided to inform his wife of the decision he was stepping out of the house to look for a hide out till the next day.

Obi.said as soon as he was pushed into the Hilux, the people brought out a tick cloth and blindfolded his face, He said they drove him around for over fours while his face was blindfolded.

“To my surprise, when they took me to one house, they came and loosened the rope that they tired my hands with, they brought one paper that I should sign, that was when I asked them why they giving me paper to sign without losing my eyes to see what am signing, they shouted at me that at this point I must obey whatever they say, I sign the document with my eyes blindfolded.

Obi who said he has no idea of where he was taken to,called on the federal government of Nigeria and Taraba state government to take note that nobody conducted his abduction but Sani Abubaka Danladi.

He said he has already reached out to his family members and informed them that his life was under threat and the person behind it is Sani Danladi.

Obi called on the IGP to conduct proper investigations into the matter since Abubaka is not above the law of the land.