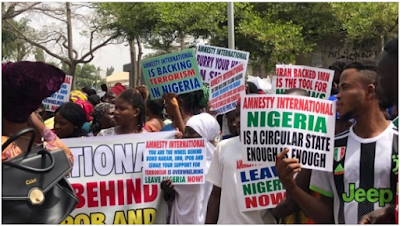 Some protesters have besieged the Abuja office of Amnesty International, asking the rights watchdog to leave Nigeria.

The protesters arrived at the office located at Maitama at about 12pm on Tuesday and barricaded the road leading to the entrance.

They expressed solidarity with the federal government in songs, while preventing entry and exit into the office premises.

They accused the organisation of fuelling insecurity in Nigeria and unduly interfering in the affairs of the country.

“You are the wheel behind Boko Haram, IMN, IPOB and ISWAP”, one of their placards said. Others read: “Amnesty International bury your head in shame,” “Leave now or we will force you to leave.”

Below is a video of the protest which AI shared via its Twitter handle.

SECOND PROTEST IN SIX MONTHS
About six months ago, a similar protest was held at the group’s office, with aggrieved persons also asking them to vacate the country.

They alleged the human rights group was taking sides with the opposition, and was  “attempting to destabilise Nigeria”.

The organisation said the protests were “sponsored”, and that they are “not affiliated to any interests, political, religious or commercial”.

Isa Sanusi, AI spokesman, had said in a statement: “Despite sponsored protests, we will not stay silent. In the face of efforts to evade responsibility or to smear our organization, we will continue to raise our voices whenever and wherever we see injustice, sexual abuse, discrimination against women, or any other violations of human rights in Nigeria.”