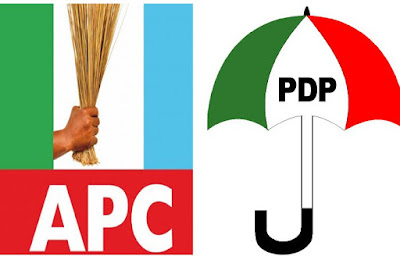 Flags of the Peoples Democratic Party (PDP) have been removed from a roundabout leading to the main gate of the Bayelsa State Government House at Onopa, Yenagoa.

The roundabout was, however, decorated with the flags of the All Progressives Congress (APC) ahead of formal takeover of the state’s governance by the APC.

The outgoing Governor of the state, Seriake Dickson of the PDP is expected to hand over power to the incoming Governor, Chief David Lyon of the APC on Friday.

The PDP flags, which were hoisted on poles around the roundabout, were violently pulled down by aggrieved appointees of the governor, who protested their non-payment of salaries on Tuesday.


But some APC leaders were seen hoisting the APC flags on the empty poles signalling the end of PDP government in the state.

As part of preparations for the inauguration, Lyon attended a parade rehearsal at the Samson Siasia Sports Complex, where the event is scheduled to hold on Friday.

The incoming governor was taken through and taught the entire process of ceremonial takeover to get him ready for the event.

Investigations revealed population increase in Yenagoa following the arrival of invited guests from different parts of the world.

All the hotels in Yenagoa were reportedly booked by guests, who kept the city bubbling.