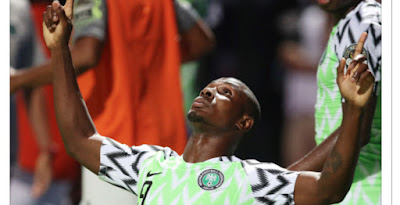 Ighalo joined United on a six-month loan from Shanghai Shenhua with an option to buy at the end of the half-year period.


✍ #MUFC can confirm that Odion Ighalo will join us on loan from Shanghai Shenhua until the end of the season.

The player has already agreed to personal terms with the team.

Odion drew the curtain on his international career at the end of the 2019 Africa Cup of Nations after emerging top scorer — equalling Yekini’s record of a five-goal AFCON golden boot.


The Super Eagles star scored five goals in the 32nd edition of the African football showpiece in Egypt.

Ighalo became the second player after late Rashidi Yekini to have amassed five goals for Nigeria in the tournament.

The 30-year-old star scored 39 goals in 100 appearances in two and a half years at Vicarage Road, including 17 goals in Watford’s first season back in the top flight after securing promotion in 2014/15.

Odion is the first Nigerian player to play for Manchester United.