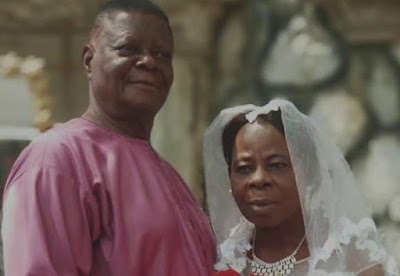 Growing up, Nwobi Nwakota had a major consideration for the man she wants to marry and he must be a Catholic.

Her dream for marriage, however, appeared unrealistic as most of the suitors coming her way were mostly from the Anglican church — another Christian movement in Nigeria.

But she would just not give up, even when age was telling on her and amid societal pressure.

“The reason I have never been married before is that I told God I only want to marry a Catholic, but the suitors that came my way were Anglicans,” she told BBC News Igbo.

After waiting for many years, her dream came through when she tied the knot with Okeke, her husband.

“I have never been married before. I am overwhelmed with joy. If you had come on the day of our wedding, it was like we were the only people there,” she said.

Although she is above childbearing age, Nwakota still craves for a child of her own, noting that it would make her happy.

“People say I have passed the childbearing age but I still want a child. If God blesses me with a child, I will be very happy,” she said.

Nwakota, whose age was not disclosed, also called on young girls who are searching for a partner to always exercise patience before delving into marriage.

“My advice to young girls searching for a partner is that they should be patient,” she said.

Okeke, who took in Nwakota, after resolving to remarry, described the union as “blissful”, adding that he feels happy again having a woman around.

“Since I already decided in my heart to remarry, I accepted her with all my heart. I need someone to live with as a sibling, as a wife and as a baby. I am very lonely,” he said.

“Someone from her family brought us together. The person knows both of us very well, so I didn’t have to speak to her, the person made it easy.

“Now, I am relaxed and complete. I often fetch water for her, she doesn’t have to tell me. I try to assist in whatever way I can.”