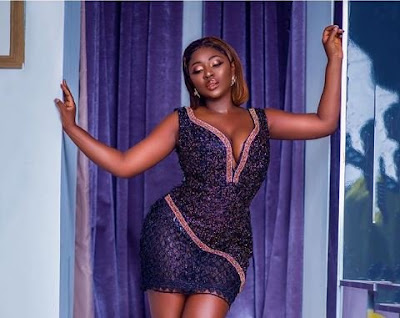 Sultry actress and mother of one, Yvonne Jegede has revealed why she left her husband, Olakunle Fawole.

The Nollywood actress had shared a behind-the-scene photo on Instagram, only for a troll who saw how intimate the actress was with her male colleague told her that if she’d done what she did with her colleague, her marriage would have still been intact.

Yvonne immediately shut the troll down with an illuminating  response, saying  she left Fawole after getting  what she craved for.

In 2019, Yvonne hinted that she is open for a new relationship.

In what seemed to be a “special announcement” on Instagram, the gifted actress called on those whose wooing she had previously turned down while she was in a relationship to try their luck.

The mother of one also took some lines in Yoruba Language to let her admirers know that “we have gone and we are back” to mingle once again.

“Special announcement. If you have toasted me before and I told you I am in a relationship, please come back. Ati lo Ati de,” she wrote.