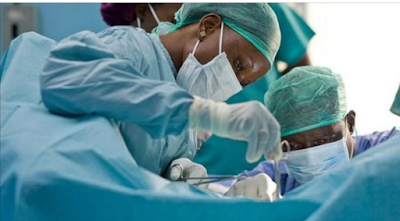 The Diaspora Professional Health Initiative (DPHI) has accused the federal government of frustrating its efforts to improve healthcare in the country.

The association comprise of Nigerian medical practitioners who are based in the United States, United Kingdom, Germany, Canada, South Africa, among others.

TheCable reports that a member of the association, who did not want to be named, said that those in DPHI were inspired by other professionals from the African continent, especially Ethiopians, who are now being supported by the Medical school of University of Toronto, Canada, to create more solutions in their country.

He said for three years, they worked on strategies they could use in sharing skills with their counterparts back home but the Nigerian government turned its back against them just when they were about implementing their ideas.


The doctor said at an event to discuss the project in Washington, in 2019, Abike Dabiri-Erewa, chairperson of the Nigerians in Diaspora Commission (NIDCOM), had described the idea as “a win-win situation for both sides, and ultimately for our country.”

The doctors’ hopes were, however, dashed in January when Osagie Ehanire, the health minister, wrote to inform them that the project, scheduled to kick off on 27th of that month, had been “suspended till further notice”.

The source said in preparation for the January 27 kick off, “27 physicians and nurses in oncology neurology nephrology and ophthalmology had bought tickets and volunteered to be in Abuja last week for the pilot phase of the DPHI that we have spent the last three years fleshing out with the ministry of health.”

“I am aware the Federal Ministry of Health has been in cordial partnership with your associations to develop and improve Healthcare delivery services in Nigeria. I use this opportunity to express my delight, and appreciation of your various collective and individual contributions to the Health sector of your country,” Ehanire wrote in his letter dated January 20.

“I wish to also commend all your contributions and enthusiasm for the launch of the pilot programme of the brand new ‘Diaspora Professionals Healthcare initiative.’ It is a laudable Idea which has been embraced by the Ministry of Health.

“However, I regret that due to salient circumstances around programme design and preparation, this initiative, scheduled to be launched on the 27th January, 2020 had to be abrogated and deferred till further notice. This will give us time for more detailed preparation to broaden and deepen the scope of your engagement and magnify the value to your service to country and people.”

Ehanire told DPHI members that the project would be redesigned “for far more impactful and beneficial delivery of service and utilisation of knowledge and skills, better ‘ownership’ and appreciation by all stakeholders.”

But another doctor told TheCable that the project is “as good as dead” because of the role played by government.

“When you hear something like ‘put on hold till further notice’ in Nigeria, just know that, that project is as good as dead,” he said.

“We spent about three years doing meetings physically and virtually aimed at skills transfer between Nigerian physicians in diaspora and those back home.

“Of about 80,000 registered physicians with the medical council in Nigeria, 45,000 are now outside of Nigeria. The basic minimum of informing the professionals in Nigeria and putting required materials in place in Nigeria, they did not do and yet they set the date and we sought for and told our initial batch of volunteers to buy air tickets. Then, abrupt cancellation of the programme or postponement till whenever. Three years of planning!”

Ehanire did not answer calls placed to his telephone and also failed to respond to a text message, seeking his reaction on the matter.

Dabiri-Erewa did not also respond to inquiries on the issue.