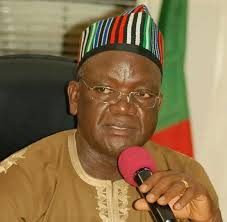 The governor who gave the charge on Friday in Makurdi while inspecting impounded cows at the quarantine unit of the state Ministry of Agriculture, said enforcement of the ranching law would continue to enable those who wish to do livestock business comply with its provisions.

He stated that there had been influx of armed herdsmen with large herds of animals into the state, despite the high level of awareness creation to the existence of the Open Grazing Prohibition and Ranches Establishment Law.

The governor stated that several herds of cattle had been impounded and quarantined in other local government areas in the state, pointing out that trucks have been acquired by government to help Livestock Guards convey impounded livestocks from long distances to quarantine units for safe keeping.


He described the influx of the armed herdsmen as life-threatening, saying such would not be condoned by his administration.

Ortom said over four hundred herders have been arrested and are being prosecuted at various stages, pointing out that the herders destroy farm produce and even make harvested crops feeds for the cattle.

He insisted that there was no intention to repeal the ranching law, stressing that ranching remains the global best practice of animals husbandry and urged all Nigerians to key into it with a view to ensuring peace between herdsmen and farmers.