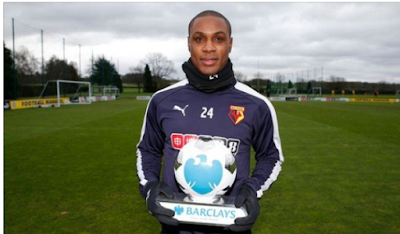 In 2016, Odion Ighalo, former Super Eagles forward, admitted he would find a move to Manchester United difficult to turn down if they came calling.

Ighalo who was in sensational form for English Premier League side Watford FC during the 2015/2016 season disclosed this to Sun UK on January 7, 2016 — the same month he was awarded EPL player of the month, edging out Mesut Ozil and Dele Alli.

He had scored 14 goals in 20 league appearances for the Hornets in that campaign.

With interest from Atletico Madrid and Roma then, the prolific striker, who signed permanently from Udinese in October 2014, disclosed his desire to stay at Vicarage Road.

“There has been speculation from Spain and Italy but I’ve played there and now want to play in England,” Ighalo said.

“I don’t think I will be moving, but I’m not sure I’d say no if United called. They were my team growing up. I loved watching Andy Cole and Dwight Yorke on TV.

“They were my idols and playing at Old Trafford has always been a dream.”


Four years down the line, Man Utd sealed a dramatic last-minute winter transfer deadline day deal to sign the 30-year old on loan for the rest of the season on Friday night.

The Red Devils also have an option to buy him on a permanent basis at the end of the season. He will earn half of his Shanghai Shenhua’s £300,000-a-week wages.

Manchester United has confirmed the deal.