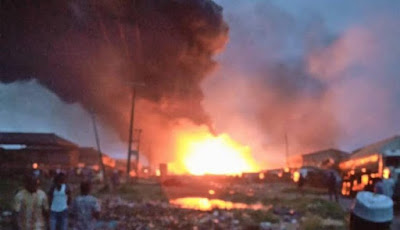 An early morning inferno has razed a section of the mammy market located at the Mogadishu Cantonment, Abuja-Keffi Expressway in the Federal Capital Territory, Abuja, an area otherwise known as Abacha barracks.

The fire started around 4am and affected a number of shops at the market, destroying property yet to be estimated.

It was gathered that it took the efforts of the FCT Fire Service, and emergency personnel from the Nigerian Navy and the Nigerian Air Force to put out the fire.


He added that the fire started early in the morning and triggered a fire alarm in the cantonment which made everyone to assemble at the scene and start the putting out before the arrival of fire service men.

Ochagwuba, who spoke with the News Agency of Nigeria, said, “The concerted efforts of the emergency responders and the barracks community in bringing the fire under control quickly was quite commendable.

“Other emergency service like the Federal Road Safety Corps also responded and assisted in controlling traffic at the cantonment bus stop.

“The Commander, Army Headquarters Garrison, Maj Gen. J.G Myam, who was physically on ground, directed soldiers to isolate the section of the fire from spreading to other parts of the market. This saved the market from further destruction. On the whole, only some few makeshift shops were affected.”