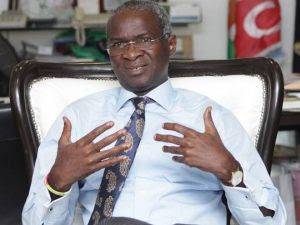 The Federal Government has said it will engage the private sector on tolling of the Lagos-Ibadan Expressway when the reconstruction is completed.

The government also stated that there were also plans to install machines to weigh tonnes of good conveyed by trailers and tankers.

The Minister of Works and Housing, Babatunde Fashola, had last year announced plans to ensure the return of tollgates which were abolished in 2003 by the administration of ex-President Olusegun Obasanjo.

The Director of Highways, Federal Ministry of Works, Mr Funsho Adebiyi, during a tour of road projects by the Senate Committee on Works led by its Chairman, Adamu Aliero, on Friday, said the Federal Government was considering a public-private partnership for the tollgates.


The Federal Controller of Works, Lagos, Mr Adedamola Kuti, said the road had been expanded to include toll plazas, underpasses, flyovers among other new designs to accommodate the high vehicular movement on the road.

“When the road is completed, it will be a new road and people will pay. But it will happen when the entire project is completed,” he said.

Aliero, while commending the contractors for the quality of work done so far, said the 2020 budget had been approved and a reasonable amount of funds had been earmarked for road, rail and power projects.

“We are happy that some of the funds will soon be released and will be used to fund road construction,” he said.

He said the Senate would continue to support public-private partnership and would work on legislation to further enhance the PPP model on road, rail and power projects.

According to Aliero, the Federal Government will no longer depend only on budgetary allocation to fund infrastructure projects.

He said, “Look at the Lagos-Ibadan Expressway, the project is not suffering because of funds because the government has made provision for it through sovereign wealth funds unlike other projects that are being undertaken by the Federal Government through budgetary allocation.

“The money is already there, all the contractor needs to do is to submit the certificate and he will be paid.

The road is also going to get additional funding from the recently recovered Abacha loot. This will certainly accelerate the completion of the road.”