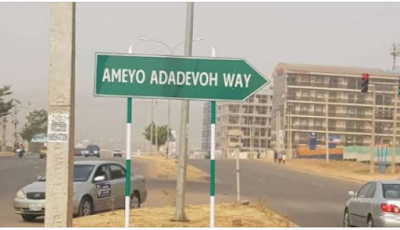 Ameyo Adadevoh Way – that is the new name of a major road in the federal capital territory (FCT).

The road was renamed after the late medical doctor whom TheCable unveiled as the ‘Nigerian of the Decade based on her role in preventing Ebola epidemic in the country.

The road, located along Ahmadu Bello Way, close to the Nigerian Air Force Conference Centre, was renamed after Adedovah, about six years after she died from the disease in Lagos.

Her death occurred on August 19, 2014, while she was managing a Liberian-American who brought the virus to Nigeria.

She was the most senior doctor who participated in managing Patrick Sawyer at the First Consultant Hospital, Lagos.

The late nurse insisted on keeping Sawyer in the hospital despite pressure from the patient and his country for him to be freed.

When a Twitter user shared a picture of the new road named after her, some lauded the gesture while others called on the relevant authorities immortalise her in a bigger way.

“She deserves more than that, a national holiday, her face on of our naira notes, a place in the national museum, part of our history & civic education textbooks & her children getting their entire education funded by the government for life,” a user tweeted via @CeOdimz.

Below are some of the reactions to the tweet:


This is amazing. Such a brave and patriotic doctor. I also personally think that the National Hospital in Abuja should be renamed after her.
— Chiemeziem MD (@DrChiemeziem) February 19, 2020

An airport, seaport or even a stadium should be named after her. And her family paid till eternity.
— Mazi Frank Ifeanyi (@OkonkwoPerez) February 19, 2020

I think something more lasting should do more than this.
Even the hospital she worked for should be named after her.
— CHUKWUBUIKEM (@chionyeadinizu) February 19, 2020

Beside her, Nigeria also lost Justina Echelonu, a 25-year-old nurse who assumed work at the hospital just a day before Sawyer entered the country. Some other healthworkers also paid the ultimate price.