Fashola reveals how terrorists attempt to bomb Lagos was prevented 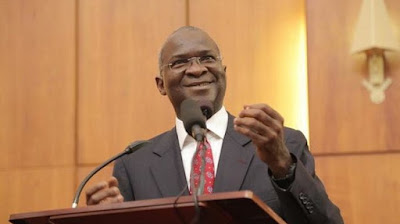 Babatunde Fashola, Minister of Works and Housing, has disclosed how terrorists who attempted to bomb Lagos was foiled in 2013.

Fashola on Thursday narrated that they intercepted 17 suitcases loaded with explosives, which were smuggled into the state to cause havoc.

The Minister, who was governor at the time made the disclosure while delivering a lecture at the fourth annual public lecture of the United Action for Change, UAC, in Lagos.

He disclosed that the suitcases containing bombs were discovered with the help of information from citizens.

The Minister stated that the collection of information and the use of it to prevent crime or apprehend criminal activity should not be left to law enforcement agencies alone.

According to Fashola, when citizens inform security operatives of impending crimes only then will crime be effectively tackled.

He said: “It is when information is offered that law enforcement must act to check, recheck and verify. So, when 17 suitcases loaded with explosives were brought into Lagos in 2013, law enforcement missed it.

“It was citizen information, which we did not discard that led to their seizure, apprehension of the suspects and their cargo of terror.

“They were tried in Lagos without public show. That was the period new courts were being built in Badagry and we prosecuted them there. They were given a fair trial because they had lawyers representing them.

“They were over 20 and were convicted and this enabled government put them in a place where they could no longer harm residents of Lagos.”