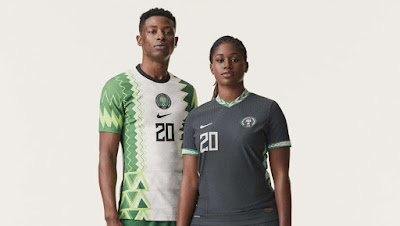 The new Super Eagles kits unveiled by designers Nike and the Nigeria Football Federation on Wednesday, has elicited reactions from Nigerians on Twitter.

NFF president, Amaju Pinnick, in a chat with our correspondent, had described the jerseys as an improvement on the ones worn by the Eagles in 2018 and 2019.

But while some fans praised the kits, saying they were beautiful, others labelled them as below quality.

Among those who praised the design was Seun Obalola, who said, “Lovely jersey, some Nigerians that don’t really know what they want will still come and criticise it.”

According to Danielle Enonche, many Nigerians were only criticising the jerseys because they were not yet endorsed by big stars.

“People saying the green and white isn’t good will change their minds the moment their favourite celebrity rocks it. I remember when the last ones were unveiled, many people criticised it until it began to make wave internationally,” Enonche stated.

Among those who criticised the new jersey was Sam Uche, who said, “What is this rubbish Nike IT students designed for the NFF and you’re smiling that you’re wearing this for Africa Cup of Nations. Don’t we know the difference between football jersey and inter house sports wear. Thumbs down for this Super Eagles kit.”

“Nike you can do better than this now,” Ijoma Chijioke tweeted.

“How many times have England, Germany, Italy or France changed their jerseys? What with all the continuous, petty changes every two years!? Common, be consistent and brandable! This is becoming childish. A Nigerian designer can do better. And why unveil in New York? No class,” Kelvin Keshi said.

“Is this one a design? We should go back and upgrade the old ones that we know and love instead of bringing anyhow design for us as a jersey. And we need our normal green not this colour, I don’t like this jersey at all,” Manuel Afabor also said.

Tunde Gbedo, however, rated the two jerseys separately, giving a thumbs up for one and a low rating for the other.

“The white and green is a huge no for me, a downgrade compared to the present one. For effort sake, 4/10, the ‘bitterleaf’ jersey looks better this time 9/10,” Gbedo tweeted.

The NFF president Pinnick said the Eagles would first wear the new kits in a 2022 World Cup qualifier against Liberia in Monrovia on October 5.