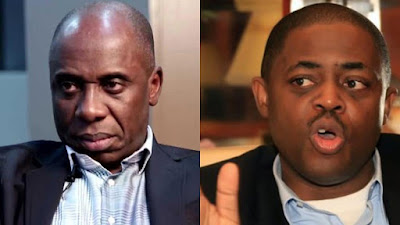 Former Aviation Minister, Chief Femi Fani-Kayode, has reacted to the allegation made by Rotimi Amaechi, Minister of Transportation that he stole two billion during his time as minister.

Earlier, Rotimi Amaechi had alleged during an interview on Channels Television some time ago and the video of the interview resurfaced online during the weekend. Fani-Kayode however retorted, calling Amaechi ‘sick’ for accusing him of embezzling the said amount during his time as a Minister.

Amaechi claimed that Fani-Kayode ran away with N2 billion given to him by the then Rivers State government to fix a deplorable Port Harcourt Airport runway. He had said: “Fani-Kayode when he was Minister of Aviation, Dr. Peter Odili’s government gave him N2 billion to fix the runway. The runway was closed for two years and Fani-Kayode left with the money”.

However, Fani-Kayode on Sunday night, while sharing the video on his Twitter page insisted that the airport was re-built and fully paid for by him as Minister.

The former Minister charged those in doubt of his defence to ask Julius Berger construction company for details of the contract.

He maintained that the allegation by the current Minister of Transportation was false, adding that the runway was commissioned shortly after he left office and was opened to public use.

“The runway at Port Harcourt Int. Airport was re-built & fully paid for by me when I was Min. of Aviation.

“If anyone has any doubts about that they should ask Julius Berger who were the contractors. The runway was commissioned & the airport opened shortly after we left office.

“Those who falsely asserted on @channelstv two years ago that I did not build the runway and that I ran away with the 3 billion naira that was used to build it are sick,” he tweeted.