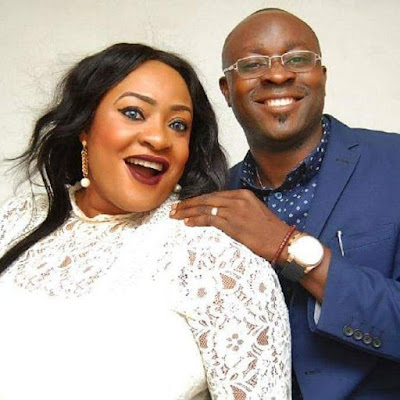 During the week, the husband of Nollywood actress, Foluke Daramola-Salako, Kayode, cried out that news circulating about his marriage break-up was false. He also stated that the false news had made his wife to lose the eight-week pregnancy she was carrying.

In a chat with Saturday Beats, the activist stated that he would seek legal action against the author of the false report. He said, “I am going to take legal action against the writer of the story, Oluwatosin Simeon. He is going to be arrested. I am already in talks with my lawyers on what to do. The guy is not even remorseful; he called me a fool. Because of that story, Foluke developed high blood pressure and lost her eight-week pregnancy.”

Salako also alleged that some people were writing such stories because they were aligned with his ex-wife. He said, “Some of them are sympathetic to the plight of my first wife. They feel she was unjustly sent out of the marriage by Foluke. But Foluke did not have a hand in it. No woman from outside can cause the break-up of my marriage if my wife did not leave herself.

My first wife, for whatever reason, left the marriage and immediately she left, I got the spiritual conviction that I should continue my life with another woman. And that is the woman I am with now. Even if I leave Foluke Daramola today, I wouldn’t go back to my first wife. My father told me before he died that I shouldn’t go back to my former wife; that’s the tradition in our family. Once a woman, of her own volition, packs her things out of the house, she wouldn’t be allowed to come to the family again.

“I always tell Foluke too that she may get annoyed and fight me but once she packs out of the house, there would be no coming back. A lot of people don’t know that me and Foluke are uniquely and peculiarly bonded. So, it is only the two of us that can announce the break-up of our marriage. No external person is authorised to announce the dissolution of our marriage to the public. Me and Foluke are the only ones that can do that. The person who wrote the story is not a professional journalist. When he heard the story, he should have reached out to me to confirm, just like you’ve done.”

Salako maintained that there was no iota of truth to the rumours that there was a crisis in his marriage. “Where is the truth in what was written? The author of the report alleged that Foluke was dating a popular politician. Why didn’t he mention the name of the politician and support it with evidence? He also said I used to have seven vehicles but now, I have one. He alleged that Foluke brought bad luck to me. Is that responsible journalism? Many of the things that are being written are demarketing Foluke and it is affecting her psychologically, emotionally and her self esteem. Do they want her to commit suicide? Foluke’s mind is out of Nigeria already. If not that she is married to me, she would have relocated out of the country; just like many of her colleagues have done.

Salako also stated that contrary to reports, he did not abandon his first wife. He added, “The false report claimed that I rendered my former wife and her children homeless but that is a lie. They currently live in New Jersey in the United States of America. It is also not true that it was my first wife that was running my school, Bosworth College International, Lagos. I have been an educationist for over 30 years but I only lived with my ex-wife for 13 years. So many people didn’t know that I actually taught the singer, Timaya, when he was a little boy.”