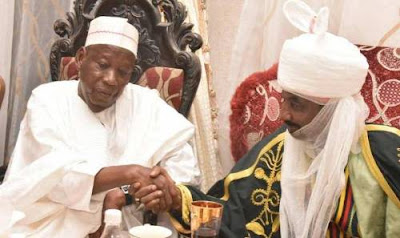 This time, it is not about alleged misspent money, but over alleged sale of landed properties belonging to the Kano Emirate Council.

Reports said the probe was triggered by a joint venture agreement between the emirate council and a private firm, Capital Properties Nigeria Limited (CPNL), for the development of one of the landed properties known as (Gandun Sarki) at Hotoro, in Nassarawa Local Government Area of the state.

The deal with CPNL was reached through a six-member committee set up by the emirate under the chairmanship of Jarman Kano, Professor Isa Hashim to coordinate the transaction, Daily Trust reported.

Two members of the committee have been arrested for “allegedly collecting N20m kickbacks and allegedly fronting for the emir”.

They would be charged to court for extortion and collecting gratification, a spokesman of the commission said.

The emirate has not yet responded to request for comment.

Apart from the Hotoro property, the emirate was also alleged to have sold other properties located at Bubbugaje in Kumbotso Local Government Area of the state. It was alleged that the Gandun Sarki in Bubbugaje was sold to CPNL at the cost of N70m.

It was further alleged that 406 plots were carved out and sold at the rate of N1.1m and N360,000 per plot depending on its size.

Bello said that anyone implicated, no matter how highly placed, in the alleged illegal sale of the public properties, would be charged to court for alleged diversion and conversion of public properties under Section 26 of the commission’s law.

“The Treasurer, Alhaji Ahmed Abbas Satatima, has been arrested by the commission, while waiting for the responses of other members of the committee who are also expected to appear before the commission,” he said.