Delta monarch cries out - "Fulani Herdsmen have invaded my kingdom" 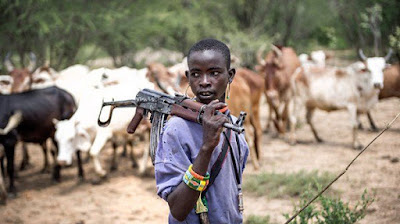 The traditional ruler of Abavo Kingdom, in the Ika South Local Government Area of Delta State, Obi Uche Irenuma II, has raised the alarm over the invasion of his kingdom by persons suspected to be Fulani herdsmen.

In a press statement on the activities of the herders on Sunday, the Abavo monarch announced that two of his subjects had been kidnapped along the Obianyima-Okpe Road.

He explained that tension had heightened in the community as a result of the activities of the herdsmen.

The monarch explained that yam barns owned by his subjects had been destroyed by the invaders, who allegedly cut tubers of yam to feed their cattle in addition to the destruction of other economic crops, including cassava.

The statement said, “As a result of the herders’ menace, my subjects have abandoned their farms for fear of being kidnapped, killed, or raped.

“To forestall breakdown of law and order in the community, a stakeholders’ meeting was held at my palace sometime ago where it was agreed that peace and order should reign between the herders and the host community.

The traditional ruler pointed out that the engagement with the Fulani herdsmen had proved the contrary, adding that their activities had caused security breach in the community.

He, therefore, appealed to the state government, the police and other security agencies to quickly intervene to avert a breakdown of law and order in the agrarian community as the whereabouts of the two missing indigenes of the kingdom was still unknown.

Irenuma said a state of emergency should be declared in Abavo following the terror that was being unleashed on the people by Fulani herdsmen.

“In the past three months, farmers cannot go to their farms; the ones that have yam barns on their farms, the tubers of yam are being eaten by the cattle of the herders,” he added.