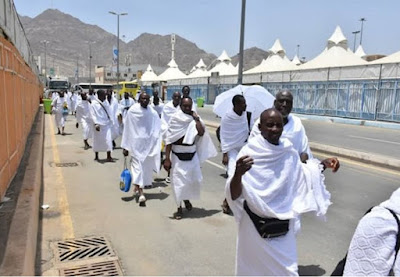 The Kingdom of Saudi Arabia has suspended visas for pilgrims wishing to visit Mecca.

The move was part of attempts to curb the spread of coronavirus to the kingdom, AFP reports.

The foreign ministry said on Thursday it suspended entry to the kingdom for the purpose of Umrah (lesser hajj) and visiting the Prophet’s mosque.


It said it was also suspending visas for tourists visiting from countries where the new virus is a “danger”.

Even as the number of fresh cases has declined at the epicentre of the disease in China, there has been a sudden increase in parts of Asia, Europe, and the Middle East.

Iran has emerged as a major hotspot in the region, where 15 people have succumbed to the disease, officially known as COVID-19.

The Gulf states of Kuwait and Bahrain have also announced additional cases this week.

The vice president is also known as the English-language spokeswoman for the 1979 hostage-takers, who seized the US embassy in Tehran and sparked the 444-day diplomatic crisis.

On Tuesday, Iranian officials confirmed that Deputy Health Minister, Iraj Harirchi, had been infected and was under quarantine.

Iran also cancelled Friday prayers in the capital, Tehran, and elsewhere in the country. The move came in response to a drastic jump in the number of confirmed cases from 100 to 245, with 26 deaths.

The President of the Senate, Ahmad Lawan, on Thursday, accused the Federal Ministry of Health of not putting serious measures in place to prevent the outbreak of coronavirus in Nigeria.

He asked the Senate Committee on Primary Health Care to liase with the ministry to intensify screening of passengers at the nation’s airports and seaports.

Lawan stated this following a point of order by the Deputy Senate Leader, Senator Ajayi Boroffice.

Boroffice drew the attention of the Senate to the failure of health personnel at the airports and seaports to screen passengers coming into the country.

The senator said the coronavirus screening at the South African airport usually take up to 30 minutes before passengers would be allowed to disembark the aircraft.

He said the situation was different on his arrival at the Nigerian airport, when the health officials at the nation’s airports merely issued a form to passengers to indicate if they were sick or not.

He said, “There is no form of any screening of passengers for coronavirus by Nigerian officials at the airport.

“It’s worrisome, situations where travellers coming into the country were not dully screened for the dreaded virus based on his experience at the airport.”