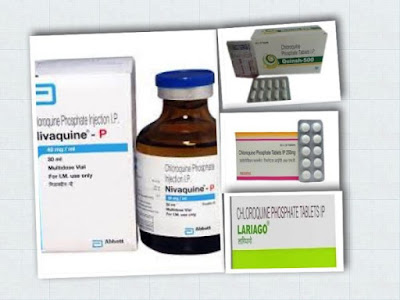 Preliminary clinical results in China show that Chloroquine Phosphate, used as anti-malarial, is quite effective in treating novel coronavirus pneumonia. The drug was banned in Nigeria 14 years ago.
Several other antiviral drugs to treat the novel coronavirus outbreak in China that has claimed over 1,500 lives are under clinical trials and some have shown fairly good efficacy, a Chinese official said.

Chinese researchers have narrowed down their focus to a few existing drugs, including Chloroquine Phosphate, Favipiravir and Remdesivir, after multiple rounds of screening, Zhang Xinmin, director of the China National Center for Biotechnology Development under the Ministry of Science and Technology, told reporters in Beijing.

In vitro experiments have shown that Chloroquine Phosphate, an antimalarial drug which has been widely used for many years, can effectively inhibit the novel coronavirus infection.

It is now under clinical trials in more than 10 hospitals in Beijing and Guangdong, which enrolled a total of over 100 patients. Clinical trials on the drug will also be launched in central China’s Hunan Province soon, Zhang was quoted as saying in the state-run Xinhua news agency.


Favipiravir, an influenza drug available on overseas markets, has been put in a clinical trial in Shenzhen, south China’s Guangdong Province, with 70 patients enlisted, he said.

The initial outcome of the trial shows the drug has relatively obvious efficacy and low adverse reactions.

‘Three to four days after treatment, the group that takes the drug has a significantly higher turning-negative rate in the viral nucleic acid than the parallel group,’ he said.

Remdesivir is developed against Ebola infections by Gilead Sciences, an American pharmaceutical company. It has shown fairly good antiviral activity against the novel coronavirus at the cellular level.

The China-Japan Friendship Hospital and the Institute of Materia Medica under the Chinese Academy of Medical Sciences have been authorised to conduct a clinical trial on the drug in over 10 hospitals in Wuhan, the centre of the epidemic in central China’s Hubei Province.

‘Next, we will make timely recommendations on the COVID-19 treatment according to the results of these clinical trials,’ Zhang said.

The researchers scanned more than 70,000 drugs or compounds through computer simulations and in vitro enzyme activity tests, and selected 5,000 potentially effective drug candidates.

Then they were tested at the cellular level against the common coronavirus infection, and about 100 drugs were chosen for further experiments, which helped to select the final drugs for clinical trials, he said.

The most urgent scientific research task is to improve the cure rate and reduce the mortality, which rely on effective clinical treatments, Zhang said.

New products and technologies have been adopted to treat severe and critically ill patients, a key approach to reduce mortality, and some have achieved good clinical effects, he said.

One of the recent progresses is the development of convalescent plasma. It is processed from the plasma collected from recovered patients, which contains a large amount of protective antibodies.

So far, a total of 11 severe patients from several hospitals in Wuhan have received the convalescent plasma therapy, with all their clinical indicators getting better and no obvious adverse reactions.

Clinical studies on the stem cell therapy, which can inhibit the overreaction of the body’s immune system, have also been carried out to treat severe patients, Zhang said.

A cause of death for severe and critically ill patients infected with the COVID-19 is ‘cytokine storm’, which is an overreaction of the immune system, said Zhou Qi, an academician with the Chinese Academy of Sciences (CAS).

‘We are also searching for existing drugs that can curb the appearance of cytokine storm, including drugs against rheumatism. Some of the drugs that are proven effective at the cellular level have been applied in clinical trials,’ Zhou said at a press conference.

A trial has been conducted on 14 severe or critically ill patients aged up to 82 in an affiliated hospital of the University of the CAS, and the results appeared encouraging, he said.

‘Now, a multi-centre, randomised, parallel-group clinical trial is underway. If the initial results show a drug is effective, we may speed up the process and provide severe patients with effective treatments as soon as possible,’ he added.