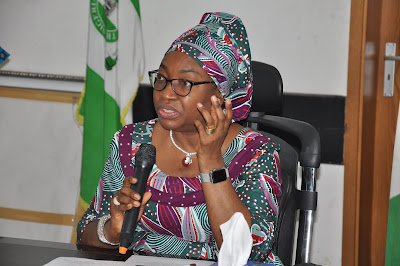 President Muhammadu Buhari Friday night has finally approved the retirement of Mrs. Winifred Ekanem Oyo-Ita as Head of the Civil Service of the Federation from the Federal Civil Service with effect from Thursday, 27th February, 2020.

Consequently, the President has also confirmed the appointed Dr. Folasade Yemi-Esan, who was the acting HoS, as the substantive Head of the Civil Service of the Federation (HoCSF).

Mrs. Oyo-Ita was removed from office on September 18, 2019 following the submission of a report on her alleged involvement in some contract awards in her office.


According to the statement, in approving the retirement, President Buhari also said that it would be without prejudice to the on-going investigations into certain allegations against the immediate past HoS. The President thanked her for the invaluable services to the nation and wished her well in all future endeavors.

“President Muhammadu Buhari in exercise of the powers vested in him by Section 171 (2) (b); and in compliance with Sub-Sections (3) and (5) of the 1999 Constitution of the Federal Republic of Nigeria (as amended) has approved the appointment of Dr. (Mrs.) Folasade. O. Yemi-Esan as the substantive Head of the Civil Service of the Federation with effect from Friday, 28th February, 2020.

The President charged the new Head of Service to bring her wealth of experience to bear in the new position so that government could deliver on the priority areas of development already outlined. He also urged the new HoS to make the stabilization of the Federal Civil Service top most on her agenda.