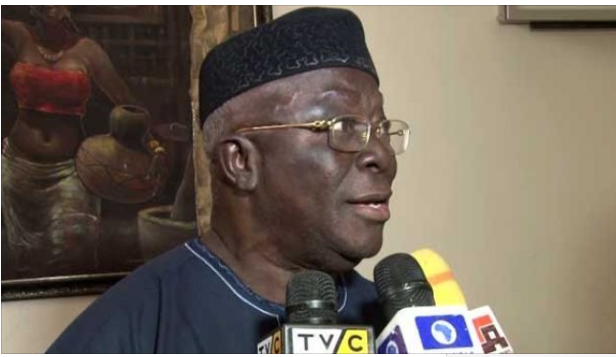 A chieftain of Yoruba socio-political organisation, Afenifere, Pa Ayo Adebanjo, has described President Muhammadu Buhari as an “illiterate” who does not know what restructuring means.

Adebanjo said Buhari’s illiteracy was taking Nigeria back to the dark ages by refusing to implement resolutions on how to restructure the country.

The Afenifere Chieftain decried that the country has not been lucky in electing the right political leaders since the return of democracy in 1999.

He spoke at a lecture titled: ‘Restructuring: Building a Knowledge-Based Economy’, organised by the Voice of Reason in honour of her Founder, Late Prince Goke Omisore in Lagos.


Adebanjo also stated that Buhari was less-concerned about the future of Nigeria.

According to Adebanjo: “Despite far-reaching resolutions submitted to President Muhammadu Buhari on how to restructure Nigeria politically, economically and socially, Buhari is less-concerned because he does not know what restructuring means.

“President Buhari is an illiterate, he does not know what restructuring means, he is less concerned about the future of Nigeria, he is only bothered about his cows.”

The elder statesman urged youths in the country to form a movement that would ensure they regain power from the old generation.

“I am 92 now, I want to challenge the younger generation to take their destiny into their hands.

“There is little to what I can do, the energy is no longer there.

“I want you to take the bull by the horn, take Nigeria back from the hands of your oppressors and build a society that will make you proud among your fellow young people in the global economy,” he said.