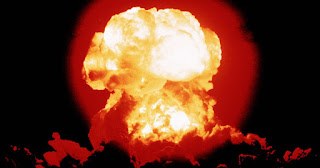 There was palpable fear at the Ekiti State Government House in Ado Ekiti and its environ this morning following a loud bang, suspected to a bomb explosion, ripped through the peaceful and siren state capital.


The incident which occurred at about 7:40 am on the morning of Saturday caused scare and tension as people scampered for safety. After the explosion, there was a cloud of heavy smoke coming out of the government house.

When contacted, the Police Public Relations Officer, Sunday Abutu confirmed an explosion in the government house but promised to get back to newsmen on the incident. However, a statement from the Commissioner for Information and Civic Orientation, Mr Olumuyiwa Olomilua, confirmed that “ an explosion was reported earlier this morning at the Explosives Ordnance Disposal (EOD) office in Ado Ekiti.

It added that “An initial on -the- spot assessment confirms that there are no casualties and the area is secured with no further threats. “Members of the public are advised to go about their normal duties”, the statement said.