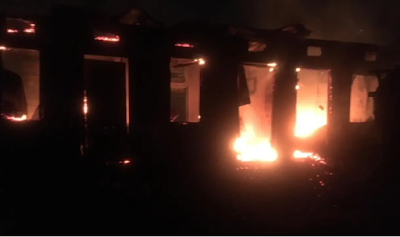 A bomb on Tuesday exploded around the residence of the Secretary to the All Progressives Congress in Edo State, Lawrence Okah.

Addressing journalists in Benin, Okah disclosed that he was lucky to be alive, following the incident which occurred in the wee hours of Tuesday.

Also speaking, a chieftain of the party and governorship aspirant, Pastor Osagie Ize-Iyamu warned against turning the state into a war zone.

The APC governorship aspirant urged the Inspector General of Police, Muhammed Adamu, and President Muhammadu Buhari to help resolve the crisis rocking the state chapter of the party.

“Since the beginning of these series of attacks on our members in the state, we are surprised that no arrest has been. Will the police say they don’t know about it?

Recall that APC National Chairman, Adams Oshiomhole and the State Governor, Godwin Obaseki have been engrossed in an alleged face-off over who heads the party at state level.

The alleged face-off had led to the governor threatening to suspend Oshiomhole from the party at state level.

Despite Obaseki’s threat, the APC National Chairman had insisted that he was not fighting any member of the party.