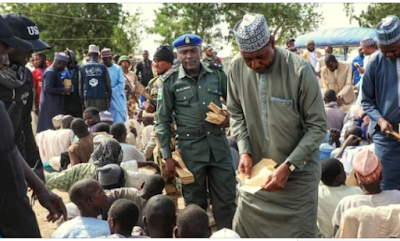 Babagana Zulum, governor on Borno, on Tuesday, visited the trapped households in Rann, headquarters of Kala-Balge local government area of the state.

Zulum, who was visiting Rann for the third time since he assumed office, flew in a chopper from Maiduguri to Kala-Balge owing to the flooded road caused by a discharge from a dam in July 2019.

The governor supervised the distribution of N100 million to over 10,000 households cut away from the rest of the state by the flooding.

In January 2017, the Nigerian air force misfired and hit an internally displaced persons (IDP) camp in Rann, killing over a hundred civilians and leaving many injured.

“Over 10,000 households in the agrarian community of Rann have been trapped while crops planted last year were destroyed by a herd of 250 elephants sighted by UN Humanitarian Air Service (UNHAS) officials from their helicopter back in December 2019,” a statement from the governor’s office read.

“Led by Governor Zulum, the officials supervised the distribution of N100m in cash to the residents in Rann, whose only option is to trek about 10 kilometres to border communities in order to buy food and other basic needs. Each of the 10,000 households in the community was given between N10,000 and N15,000 cash because there is no banking service. Zulum had to fly cash as last option.

“Male householders received N15,000 each, while their female counterparts received N10,000 each.

“Farmlands still flooded cannot be cultivated by the residents forcing them to completely depend on aid transported to them through humanitarian air services.

“Rann, largely populated by Borno’s Shuwa arabs, is considered Nigeria’s most severely disadvantaged local government headquarters. Despite 25 years of existence, Rann is usually inaccessible during rainy season as there is neither road nor bridge linking the council headquarters with the rest of Borno State. The council is also not connected to the national grid for electricity supply.”