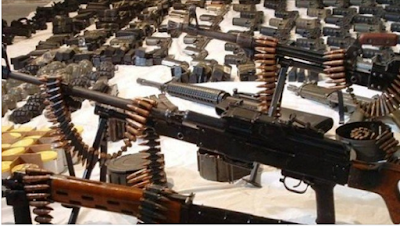 A bill seeking to establish a national to check the proliferation of small arms and ammunition has passed second reading at the senate.

Leading a debate on the floor of the senate on Wednesday, Smart Adeyemi, senator representing Kogi west and sponsor of the bill, said the proposed commission would seek the sources of these arms coming into the country.

Adeyemi said the menace has been a problem in the international community since 1998.

“The objectives of the bill includes; to identify sources and main routes of these small arms, ammunition and light weapons,” the lawmaker said.


“To identify why this illicit trade thrives in Nigeria, to liaise with the relevant authorities, agencies and organisations with the aim of tackling these menace.

“To recommend possible ways to monitor, control, halt, and mitigate these nagging illegal activities of unscrupulous persons, companies and organizations. To itemize and identify promoters, users, patrons and reasons for these illegal activities.

“To explore all avenues to achieve adequate funding for this campaign. To train and build the capacity of the corps and others towards an effective enforcement of this mandate.”

“The UN estimated a substantial percentage of illegal arms that is in circulation in West Africa are in Nigeria,” he said.

“This has fuelled violent conflicts as witnessed in the Niger Delta, kidnapping in the south-east, armed robbery pandemic in the south-west, ethnic-religious violence on the Plateau, and the Boko Haram operations in the north-east, a situation which has plunged the nation into a serious state of insecurity.”

“The bill is apt and timely considering the security situation we are facing in Nigeria today,” he said.

“It is right in time to set up a commission to be in charge of proliferation of arms in Nigeria.”

The bill passed second reading after Senate President Ahmad Lawan put it to a voice vote.