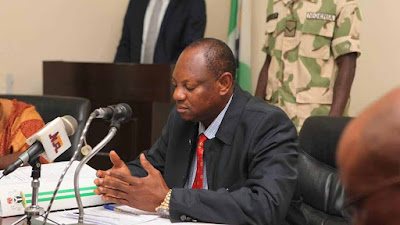 The Presidential Amnesty Programme (PAP) says the hundreds of youth who staged a protest on the East-West road on Wednesday claiming non-payment of 23 months benefits were not part its scholarship scheme.

Mr Murphy Ganagana, Special Assistant on Media to the Chairman of the PAP, Prof. Charles Dokubo, told News Agency of Nigeria on Wednesday that 10,000 scholarship beneficiaries under the scheme were getting their monthly stipends regularly.

“Those that were enlisted in the data base and offered scholarship have been paid up to this month, February.


“The protest is a cheap blackmail by persons who got into the schools through the back door,” he said.

Meanwhile, hundreds of undergraduates from 10 different universities who said they were scholarship beneficiaries on Wednesday blocked the East West Road for more than three hours in protest.

They were demanding for stipends from the Presidential Amnesty Office, which they said had ran into 23 months.

The students were all wearing black dresses and carrying placards with inscriptions such as ‘Dokubo allow God to use you’ and ‘Charles, we rejoiced over you, why are you now making us cry?’

Other inscriptions read: ‘Don’t push us back to the creek’; ‘studying without feeding’; ‘Dokubo pay our stipends’.

The leader of the protesting students, Gabriel Zuobai, a 300 level student, called on the relevant authorities to persuade the amnesty office to pay them their outstanding stipends now.

“We are begging the relevant authorities to please prevail on our agency, which is the amnesty office, to ensure that our money is paid.

“We are all students. We are hungry. What do you expect us to do in this kind of situation?

“At the initial stage, we were about one thousand plus but they decided to pay some persons and left the rest of us because they said that some of us are not captured in database.

“As a matter of fact, we did not take ourselves to these schools. The schools themselves called us and gave us admission letters.

“We did not send our names to the schools. So, we wonder why we will be deprived of our own stipends as indigenes of Niger Delta.

“We are all students from different universities and over 700 in number. They owe us for 23 months now.

“We wonder how amnesty office come to realize that some are on data base, while some are not yet they recently deployed some persons,” Zuobai said.

There was heavy traffic build up on the East-West road which stretched to several kilometers subjecting motorists and passengers to hardship while the protest lasted.