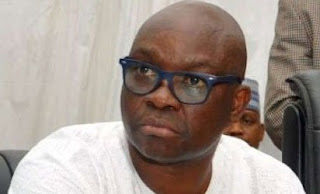 Ex-Ekiti State governor Ayodele Fayose has lamented the state of the Akure-Ado Ekiti Road, saying it has become a death trap.

Fayose called on the Federal Government to fix the road linking Akure with Ado Ekiti.

He said, “The road is now in such a deplorable state that motorists now avoid it.”

A statement by the media aide to the governor, Lere Olayinka, on Tuesday said the ex-governor made the call at the Akure Airport on Sunday.

He said, “The road has become a source of severe hardship for Nigerians, especially the people of Ekiti State who are the major users of the road.

“The road is too important for the economies of Ondo and Ekiti states as well as for the people of the states to be neglected completely by the Federal Government.”

“Apart from attacks by criminals, the road is also a death trap for travellers as several lives have been lost in motor accidents.

“The Federal Government should therefore see to the fixing of the road so as to alleviate the suffering of commuters and restore the dead commercial activities in towns and villages along the road.”