10 die in return journey from pilgrimage 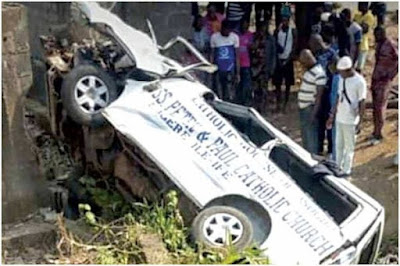 Six worshippers returning to Ile-Ife from the annual Oke Maria pilgrimage in Otan Ayegabju, yesterday, lost their lives in a ghastly auto accident at Eripa, Boluwaduro Local Government Area of Osun State. It was also gathered that nine others sustained various degrees of injury.

The annual Oke Maria Catholic pilgrimage held between Saturday and Sunday, is an annual programme where Catholics gathered for prayers at the Oke Maria Mountain located in Otan Ayegbaju, Osun State.

Eyewitness account revealed that the bus conveying passengers and other commuters from the annual pilgrimage held on Saturday lost control and rammed into a fence at the other side of the Iree/Eripa/Otan-Ayegbaju/Ila Expressway, causing the vehicle to fall into a pit.


According to SP Folashade Odoro, the lone accident happened at about 11 am, yesterday, when the bus lost control and ran into a ditch in Eripa.

She said six people died in the accident while nine others sustained various degrees of injury. She said the remains of the dead had been deposited in LAUTECH Teaching Hospital in Osogbo for post mortem while the injured victims were treated at a private hospital in Iree, Osun State.