Yahaya Bello names 20 appointees as he is sworn in for second term, 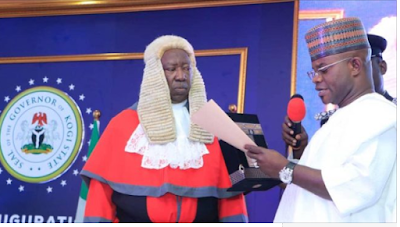 Yahaya Bello, governor of Kogi state, took the oath of office for a second term on Monday.

At his inauguration ceremony which held in Lokoja, the state capital, Bello announced the appointment of 20 aides and commissioners.

Some of the appointees were those who served with him during his first term in office.

The governor appealed to members of the state house of assembly to screen the nominees in earnest to enable full take-off of government activities.

Bello hinted that the blueprint of his second tenure would be out within the next 90 days, adding that welfare of the people would be prioritised.

“By the grace of God, the oath of office I have just taken is a pact to do right to all citizens as the … executive governor of Kogi state,” he said.

”In this second and concluding term of my constitutional tenures as governor, it shall be the principal preoccupation of my administration to deliver good governance.”

Folashade Ayoade-Arike and Asuku Jamiu were retained as secretary to the state government and chief of staff respectively, while Sunday Faleke was named deputy chief of staff.