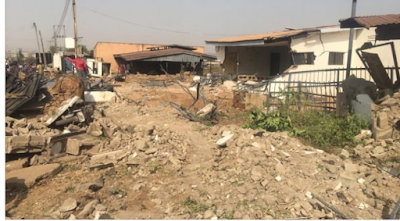 Some community members had earlier planned to stage a protest against the demolition.

In a statement, Murtala Olanrewaju, the state commissioner of communications, described the planned protest as “needless”.

He said the demolition was earlier resisted by some persons, but security operatives were able to handle the situation.

“The Kwara State Government early today began the physical reclamation of the plot of land bordering the civil service clinic in Ilorin,” the statement read.

“The reclamation exercise began in the early hours of Thursday to avoid any needless confrontation. Attempts by some persons to provoke government’s agents on lawful duty were resisted by the security agents who exercised the highest level of restraint and professionalism.”

The commissioner said the state government did not receive any court order barring the demolition as of the time the building was brought down.

He urged members of the state to remain calm, adding that the government seeks to “restore sanity to the state” within the confines of the law.

“Contrary to the claim that the State Government was served court papers on the matter, we state that no court paper has been served as at the time the government took steps to preserve what lawfully belongs to the people,” it read.

“Finally, we urge the people of the state to remain calm, peaceful, and be guided only by facts of the matter and not be drawn into an emotional outburst that is targeted at distracting the public from the issues at stake.

“While the administration is focused on restoring sanity to the state after years of barefaced impunity, we will do so within the limit of the law.”

In 2019, AbdulRahman AbdulRazaq, the governor, announced his decision to revoke the property owing to alleged illegality in its acquisition.

He had said the land was originally designated for the construction of a secretariat and parking lot of the civil service clinic, but that it was unlawfully allocated to a private firm — Asa Investments Limited — without any record of payment to the state government.

But the former senate president countered this statement, saying his late father lawfully acquired the land from the state government.