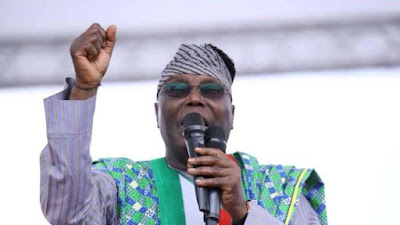 The hierarchy of the Peoples Democratic Party (PDP) should concentrate on strengthening and rebuilding the party for now, rather that dissipating energy on the 2023 elections, the PDP presidential candidate in last year’s polls, Alhaji Atiku Abubakar warned on Friday.

Atiku said it was not time yet to start discussing about the elections.

“Our preoccupation at this point in the @OfficialPDPNig should not focus on elections, but on rebuilding and strengthening our party for the challenges ahead of us,” he wrote on Twitter.
He was apparently responding to recent statements by the Chairman of the PDP Board of Trustees (BoT), Senator Walid Jibrin that the party would soon begin the process of zoning and picking its flag bearer for the 2023 presidential race.

He said the candidate could come from any of the six geo political zones.


A few days later, Jibrin told reporters in Kaduna that he had been receiving anonymous phone calls threatening his life for not endorsing Atiku as the party’s presidential candidate for 2023.

Atiku mentioned no name in his tweet on Friday.

Jibrin said he was tagged a traitor for failing to declare Atiku as his party’s preferred candidate.

“I have received calls from some people threatening my life over my coming out not to mention that the presidency of this country be zoned to the north-east,” he had said.

“They were saying that I am a traitor that I should have come out to say that it is only Atiku Abubakar because I said that Atiku was already overthrown by the supreme court. They said for that I should say Atiku is the man that I want.”