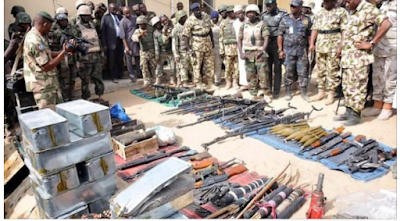 Some of the weapons used in the conflicts between farmers and herders in the country have been traced to Nigerian security agencies, according to a report by Conflict Armament Research (CAR).

The international conflict research group said some of the weapons were traced to “stockpiles of Nigerian defence and security forces”.

The report, which can be downloaded here, said 148 different weapons were discovered and analysed, and those manufactured in Nigeria are the second most prevalent among them.

“Predictably, given widespread weapon diversion from many governments in the region, CAR has traced four weapons in the data set to the stockpiles of Nigerian defence and security forces,” the report said.


“Nigerian-manufactured small-calibre ammunition—including cartridges manufactured as recently as 2014—is the second-most prevalent type of ammunition in this data set.

“Four of the weapons in the data set were previously in service with Nigerian national defence and security forces. CAR has established this through formal tracing and the analysis of secondary marks applied to the weapons, which identify their users.”

At least 3,600 people have been killed in clashes between farmers and herders as of 2018, according to Amnesty International, which blamed the casualties on “gross incompetence” on the part of the authorities.

In some cases like in Plateau state where hundreds of lives have been lost in violent clashes, the police and other security agencies arrest suspects without prosecution.

The report, which focused on Zamfara, Katsina and Kaduna states, said a study of the weapons in use shows the violence is “perpetrated almost exclusively with small arms and light weapons”.

CAR said while some of the weapons used in the conflict are locally manufactured, some originated in Gaddafi-era Libyan stockpiles, and others produced in Europe, East Asia, and the Middle East.

It also traced some of the weapons to terrorists and special forces in Iraq and Libya.

Some of the key findings of the report are: