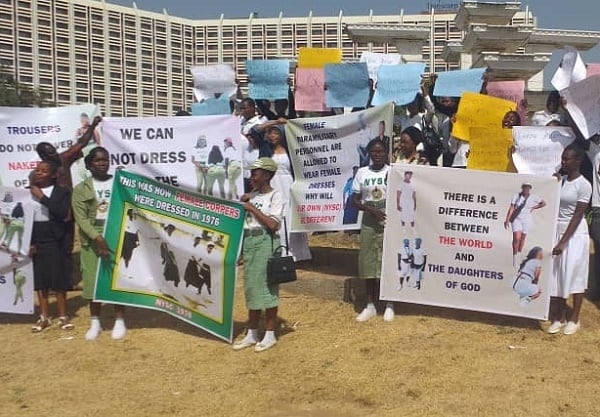 A group known as the Serve With Skirts Movement has asked the federal government to allow female corps members wear skirts during their mandatory service year.

The protesters said the wearing of trousers by females “evokes immorality.”

On Wednesday, members of the movement converged at the Unity Fountain in Abuja carrying placards which read: “There is a difference between the world and the daughters of God”, “Our sisters cannot dress like men, they should be decently covered” and “We are not worldly we are true children of God” among others.


Speaking with TheCable Lifestyle, Udochi Emmanuel Baba, a lawyer and one of the leaders of the movement, said so many female corps members have been “embarrassed and harassed” because they refused to wear trousers.

Baba said the law establishing the National Youths Service Corps (NYSC) “has not clearly stated what the uniform should be.”

“The reason why we are here today is because year after year our female corpers posted to various states are being embarrassed, they are decamped, de-kitted and sent out of the camp on the grounds that they are putting on trousers and we know that it is a breach of their fundamental human rights as provided for in section 38 (1) of the constitution of our country,” she said.

“These trousers they are showing in the banners here, are evoking immorality in the camps and we cannot take it anymore. This was not so in the beginning, way back in the 1970s and 1980s we had our mothers wearing skirts and we want to go back to that.

“We have asked for exemption severally. NYSC has not given that as an option, they have made it a compulsory one-year service for everyone below the year of 30 and they are mandated to wear those clothes.”

When asked what they will do if their requests are not met, the lawyer said: “We may ask need to ask for redress in the court.”

Narrating her ordeal, Patience Noble, a corps member, said she has not graduated from the scheme since 2016 when she was deployed to serve in Ebonyi.

“I was posted to Ebonyi state for my NYSC and when I got there, I told them that I will want to wear my skirts and serve the nation. As a citizen of my country, I have the right to serve the nation just like every other graduate has,” she said.

“They insisted that I wear this trouser or leave the camp. During the camp there were lots of insults and humiliation – one of military tore the skirts I was wearing on my body.”

The corps member said she was told that she would not be given a certificate until she wears a trouser.

In December 2017, Amasa Firdaus, a law student at the time, was not called to the bar because she allegedly broke the dress code by wearing a hijab.

After an outrage, Firdaus was finally called to the bar in July 2018 – after seven months.