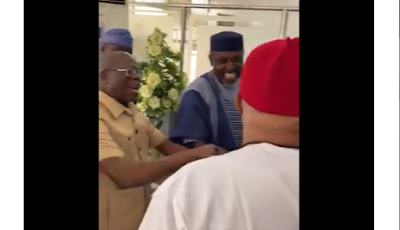 The victory of Hope Uzodinma at the Supreme Court has reunited the new Imo state governor with his political enemy, Rochas Okorocha, and the national chairman of the ruling party, Adams Oshiomhole.

The APC primaries that produced Uzodinma as the candidate of the party had torn the Imo state chapter of the party apart.

The former Imo state governor, Okorocha, had wanted his son-in-law, Uche Nwosu, to succeed him as the next governor of the state.

Following Nwosu’s failure to secure the party’s ticket, Okorocha withdrew his support for the APC threw his weight behind Nwosu who had crossed to the Action Alliance (AA) to contest the election as its flagbearer.


Okorocha who is now representing Imo West at the Senate also tacked Oshiomhole then, accusing him of causing the crisis that ensued from the party’s primaries.

However, after months of legal battle, the Supreme Court has declared Uzodinma as the duly elected governor and sacked Emeka Ihedioha.

In a recent video making the rounds on the internet, the three key APC stakeholders were seen jubilating and rejoicing together

[VIDEO OF THE DAY]